Hands-on with Zombies Ate My Friends

If there's one thing more stale than a zombie, it's a zombie as a baddie in a book, film, television programme, or game. The undead have been done to death.

It's even getting tricky to find a specific video gaming genre that hasn't had the undead liberally thrown at it in an attempt to exploit this - thankfully fading - zombie craze.

Freemium is another craze, attracting similar complaints of ubiquity and creative staleness. Critics insist that freemium games are guilty of slavishly following an energy or currency-based payment model at the cost of variety and innovation.

Currently available in soft launch mode in Canada, Zombies Ate My Friends (ZAMF) is a zombie-themed freemium title from Glu Games that... no, wait, come back. It's actually kind of alright - or at least it is from my time with it so far. 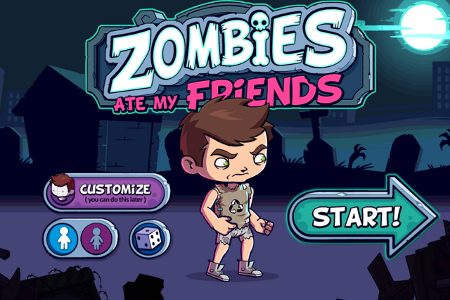 Actually, that makes the game sound more exciting that it is. Most of it plays out slowly and with simple taps on the screen to progress through menus, rather than balls-to-the-wall action.

Each area of the crumbling cityscape I experienced had me tap on an arrow icon to move to a specific location - there's no free movement in ZAMF - then scrounge for cash, experience points, and energy by tapping highlighted objects in said environment. 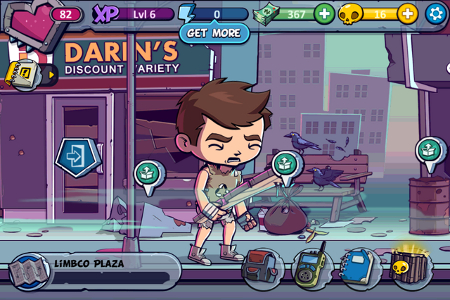 When you encounter a zombie, you enter a turn-based battle mode, which gives you multiple options for tackling the brain-muncher in front of you. If you've found a projectile weapon and collected a little ammo for it, you can blast your foes from a distance as he slowly shambles towards you.

If you haven't, you have to get up close and personal, but at the risk of losing health points.

Don't worry if you do die, though - there are always revives to purchase, and even if you don't have any of these in stock you simply wind up back at the safe house you last secured.

You can speak with those not infected by the plague to receive specific quests. They all consist of the above, and I found very little variation during my time with the game.

At least there are several ways to customise your experience, and that's probably the game's most significant feature: you can play this (very similar) content in a few different ways, and looking however you want to look. 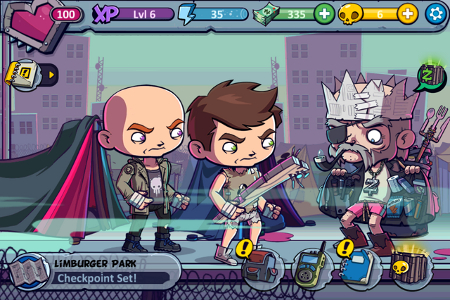 Character customisation starts at "solid", and even after the comparatively short time I spent with the game this increased to "comprehensive". Different hairstyles and clothes become available as you gain levels, and you can spend soft currency to unlock them.

You'll also pick up different weapons along the way, from simple sticks to shotguns to frying pans. It's great to mix up the attacks you use against the hordes, but they all come with two caveats. Firstly, you use up energy every time you attack. And secondly, you have to exceed the level required for each weapon to wield it.

This means that you can't swing a frying pan if you aren't level 6, and this restriction seems a bit arbitrary. The energy system also limits how long you can play for, which is obviously one of the ways the game is looking to make money off you. 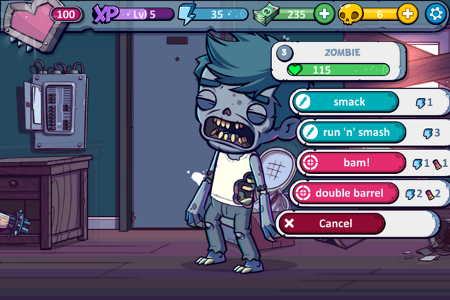 The simplicity of the combat system is starkest when you're up against a boss character. These have larger reserves of health, and can do far more damage to you, than regular zombies, but all you can really do is stand there and exchange blows.

Other small issues cropped up while I was playing the game. The most prominent of these was that at one point my character's mouth simply disappeared from his face.

Gone. No idea why. One minute his lips were there, the next they weren't. I experienced a couple of game-stopping crashes, too.

Given the game's technically in soft launch mode at the moment, I'm sure these technical hitches will be fixed, but it's disappointing nonetheless for our friends in Canada.

So, go grab it for yourself now if you fancy risking an early dabble. Here's how to get a Canadian iTunes account, and do let me know how you find it by leaving a comment in the box below.
Next Up :
Everything you can expect from the adorable Ensemble Stars!! Music × Sanrio characters collaboration event