Om Nom and beyond: ZeptoLab, a studio profile

Cutting through the competition

Starting out at an early age toying around with a ZX Spectrum, the Russia-born Voinov twins have been making games for over two decades.

Yet it wasn't until they founded ZeptoLab that the twins hit really big, building on the popularity of seminal puzzle title Cut the Rope to become one of the game industry's leading lights.

In the latest of our company profiles, we speak to co-founder Efim Voinov about ZeptoLab's early days, embracing expansion and creating an empire on the back of a sweet-toothed monster.

Just like ZeptoLab, MuddyGlass would enjoy success by forging strong links with platform holders and capitalising on the possibilities offered by an expanding market. 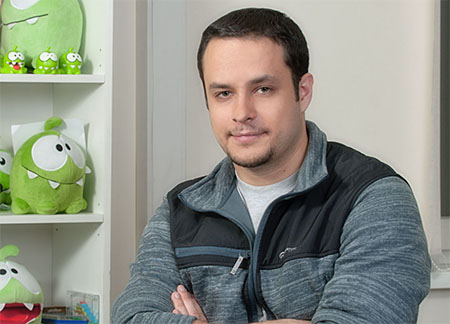 "Their PDAs looked simple and smart, and once the affordable Palm m100 was released, I immediately got it. We were excited to start a new project.

"We released several games and apps, and managed to achieve some success - one of our games, Spy Chase 3D, was pre-installed on the Palm OS-powered smartphone, and several US schools adopted our animation creation tool, Animator."

With independent success under their belts, Efim and Semyon took on roles at Reaxion, a mobile developer and publisher focusing on feature phone titles.

Efim says that the experience taught him that a good working atmosphere, the right tools, and a focus on quality over quantity are essential to running a successful company.

It was with this in mind that he would strike out on his own in 2009, setting up ZeptoLab while Semyon worked in Finland at Digital Chocolate.

In the game you use slingshots to propel a spherical assassin into the air, using accelerometer controls to guide the character on his parachute-aided descent. 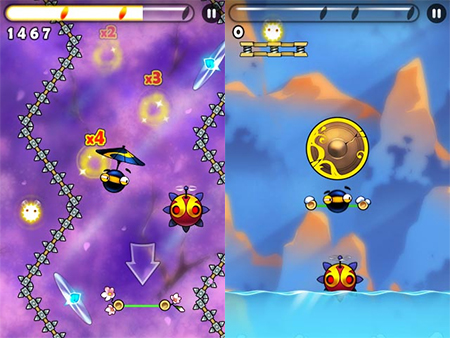 "In the initial concept, there was only a single slingshot, which was used to launch the projectile toward the targets," says Efim.

"One of our goals was to make the controls as intuitive as possible, and we came up with the mechanic of using your finger to slide the slingshot."

Happy with this initial concept, Efim settled on an Asian-themed setting and a ninja protagonist, before looking to evolve the gameplay.

"We came up with a concept of a rope to help the hero navigate, and began calling the game Yo-Yo Ninja," he says.

"Later, when we showed the game to our friends, it appeared that the mechanic of the rope was too difficult. We intended to target a casual audience, so we replaced it with the more intuitive parachute."

It was a wise move. Published by Freeverse in February 2010, Parachute Ninja hit the top ten paid charts on iOS and would go on to rack up over 3 million downloads.

Buoyed by the success of Parachute Ninja and with Semyon leaving Digital Chocolate to join the fold, ZeptoLab began work on its next project.

"Although the rope didn't make it into the final release of Parachute Ninja, we had spent a long time working on the physics of the rope mechanism to make it feel right," says Efim.

"We started thinking about how else it could be applied, and decided to use the same engine when creating the game design for our next project, which turned out to be Cut the Rope." 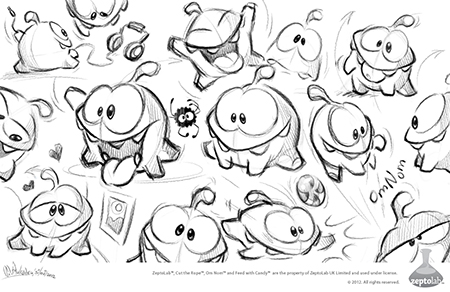 Even before release it was clear that ZeptoLab was onto something.

"I think the first indication that we were on the right path was when one of my friends who had never played games before got his hands on the prototype and didn't return my iPhone until he had collected all the stars," says Efim.

"Physics seems complicated, but it actually comes very naturally to us as humans - both children and adults. I think that's why physics-based games are so popular and have such wide appeal."

Despite all this, Efim was still massively surprised by the popularity of the Chillingo-published game.

"In a matter of a few days, the game climbed to the number-one spot in most countries, and it became clear that it had greatly exceeded our financial expectations," he says.

To date Cut the Rope has been downloaded more than 250 million times.

The importance of support

For Efim, the post-release support for Cut the Rope has been a key part in the game's continued success.

"We always think about how to encourage players to return to our games," he says.

"By consistently delivering new content and features, we keep our games fresh and add more challenge for those who seek it. It's critical to our success because it turns players into dedicated fans." 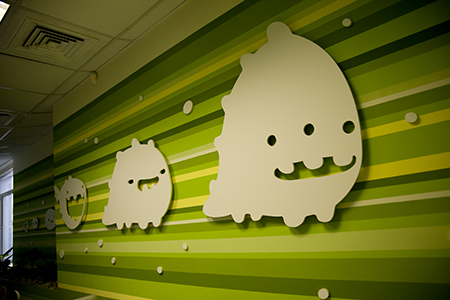 Released in January 2013, over two years after the game's initial release, Cut the Rope's latest update takes the game's tally of levels to 325.

In addition to this ZeptoLab also released the self-published Cut the Rope: Experiments in July 2011.

A spin-off from the main game, Efim identifies Experiments as a place to play around with novel new features.

"During development, our team occasionally came up with a number of great ideas that didn't quite fit in the original Cut the Rope."

"When the amount of ideas accumulated enough, we started developing Cut the Rope: Experiments.

"We saw Experiments as an opportunity to expand beyond what we had done with Cut the Rope, while keeping the core that our fans loved."

And, of course, Experiments also helped maintain the visibility of what had become a hugely profitable franchise.

At the heart of all of this is a little green monster with an insatiable taste for sweeties: Cut the Rope's Om Nom.

Designed to "tap into the player's paternal instincts," Om Nom is one of the most recognisable mascots in the industry, due in no small part to ZeptoLab's willingness to capitalise on the character's popularity.

"In the first days after Cut the Rope went live, we noticed that people were frequently writing about their desire to have more connection with Om Nom beyond the digital experience," says Efim.

"This inspired us to bring him to life in the form of plush toys, apparel, board games and other merchandise." 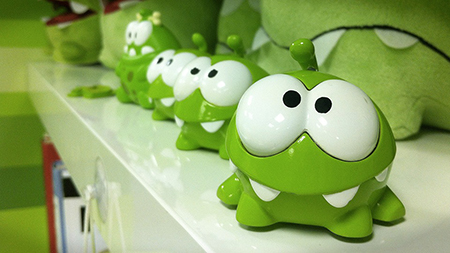 Next up, says Efim, is a deal with Burger King to bring Om Nom toys to the fast food chain's kids' meals. And beyond that ZeptoLab is even working with Sony to bring an On Nom show to the small screen.

No longer just a game developer, ZeptoLab is now an entertainment company.

Going hand-in-hand with this increase in interests, ZeptoLab has also significantly expanded its workforce, growing from two to almost 60 employees since 2010.

"First, we needed to support our initial iOS release with updates, so we hired a programmer, an artist and a game designer.

"Together, we managed to consistently update Cut the Rope, and started to further expand the company with our CEO, Misha Lyalin.

"The next step was to cover other platforms, so in the course of a few months we got a team onboard to start the porting process."

Alongside this ZeptoLab has doubled its staff in the last year and even now is "currently in active hiring mode." 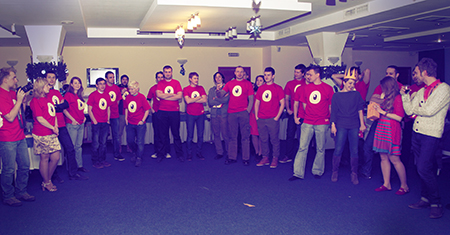 Efim says that dealing with increased expectations from the business side of the company was "complicated" at first, as it brought attention and opportunities that ZeptoLab "lacked the resources to handle."

"Now, the situation is much better," he says.

"We have great professionals on our team who help us operate from a business standpoint, so Semyon and I don't have to sacrifice our desire to stay in development."

This desire was apparent during the making of ZeptoLab's second self-published release, Pudding Monsters.

In keeping with the ZeptoLab's expansion, Pudding Monsters was born of a company-wide ideas contest, in which staff were encouraged to share their game concepts.

Yet Efim and Semyon still chipped in with the some of the characterful puzzle game's art, programming and design work.

Not the runaway hit that Cut the Rope proved to be, Pudding Monsters nevertheless enjoyed high chart positions across the world following its release in December 2012.

For Semyon Voinov, however, Pudding Monsters has greater significance beyond its commercial performance.

"During development, we added cross-platform capabilities to our internal framework, which allowed us to release the game both for iOS and Android simultaneously," he says.

"So, on a technical side, this project is much more important for us than it might appear from the outside, in that it will help us to boost the development speed and quality of our upcoming apps."

The next twelve months promises fresh Cut the Rope content, a number of new games across fresh IP and the company's first steps in the freemium market.

It's the beginning of a hugely productive spell for the company, one that would have been scarcely conceivable during the early days of MuddyGlass. 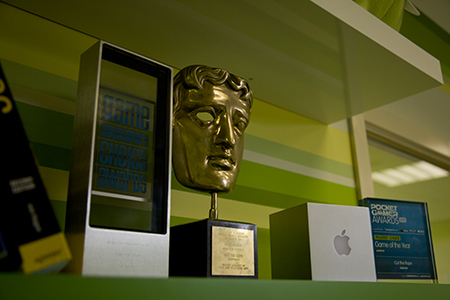 "Semyon and I were lucky enough to start working at the dawn of the mobile industry," says Efim.

"It's exciting to see how vast the changes have been, and how much the industry continues to evolve."

Now at the forefront of that evolution, it's Efim and Semyon Voinov's job to ensure that ZeptoLab can stay there.

You can read our exclusive look at the making of Pudding Monsters here.
Next Up :
Top of the table: New Star Games, a studio profile