If you thought mini-golf was all about nuisance windmills, chipped paint, and awkward first dates, think again. Wonderputt, from Reece Millidge, turns the pseudo-sport into a bonafide work of art.

That's pretty much the only view you'll see throughout the 18 holes, but the world shifts and morphs as you play. Tiny cows munch a golf course into the grass (before being abducted by miniature UFOs), asteroids punch craters into the ground, and entire sections split open to reveal new courses.

Your job is to hit 18 increasingly ridiculous holes, by firing a ball (Angry Birds style) around the cubic world. It's not particularly hard - there are a few puzzles to solve, some timing to take into consideration, and a few frustrating holes - but it's a fun way to explore Millidge's imaginative diorama. 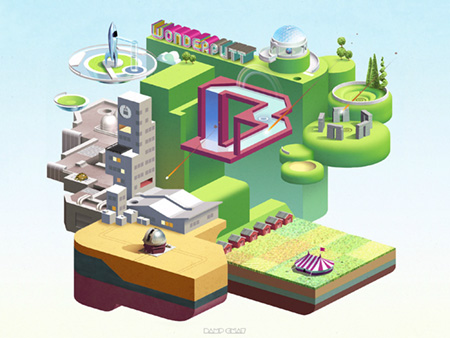 All the while, you'll be amazed by the wonderful animations, and the understated soundtrack by Brighton-based musician Dan Millidge. It's a bit like one of those automated toy towns you see in snow-laced shop windows at Christmas. Well, in American films, at least.

Wonderputt started life as a free browser game - so what will you get for your 69p / 99c? Well, there are a few achievements and leaderboards tied in with Game Center, and Retina display art, if you're looking for extras.

But in reality, the 10 minutes of slaw-jacked sense of wonder is worth the modest entry price alone. Wonderputt will hit iPad (2 and 3 only) on September 12th.

Millidge (designer Reece, that is) is currently working on Icycle 2 (play the first, here), which is due for release later this year on iPhone and iPad.