If you're looking for solid strategy to pass the time on mobile, Touch Dimension's library offers a few of the more interesting titles on the platform. This month, the developer's trio of games - Autumn Dynasty, Autumn Dynasty Warlords, and Wizards & Wagons - have had their prices slashed to £1.49 / $1.99 each, for both iOS and Android owners. 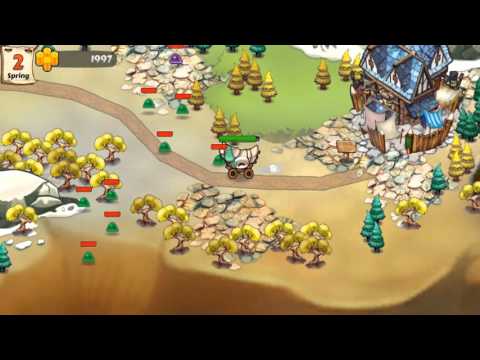 Their most recent game, the Bronze Award-winning Wizards & Wagons (iOS, Android), combines on-the-road rail shooter against fantasy hordes with a trading sim, as you gather your wares and try to make a profit in different cities. The game was recently updated with new weapons, bosses, locations, and NPCs.

Autumn Dynasty (iOS, Android) built the RTS ground up for mobile, with simple controls and a gorgeous brush stroke art style. The game earned a Silver Award back in 2012, as did its sequel Autumn Dynasty Warlords (iOS), which expanded the gameplay with 4X elements that let you conquer China and engage in diplomacy and espionage.

Wizards and Wagons - You take the high road, I'll take a heavy load

Out now: Wizards and Wagons has you making a living as a hero who has to get a proper job

What happens when you cross The Oregon Trail with Kingdom Rush? Wizards and Wagons, that's what