And all in the name of charity

Japanese musician and game maker Masaya Matsuura is best known as the creator of the rhythm action genre with PaRappa the Rapper.

It's perhaps no surprise, then, that his current project is a rhythm action game for iPhone.

Where it does get interesting, however, is the game - called WINtA, which stands for War Is Not The Answer - is being made as part of the game charity One Big Game.

Set up to raise money for various children's charities by selling games made for free by developers during a four month exclusively period, One Big Game has just announced its first release: an Xbox Live Arcade musical block game called Chime from UK studio Zoe Mode.

Matsuura's WINtA is expected to be next, although it remains in the early stage of development.

Shown off publicly for the first time at the Nottingham Gamecity event, WINtA is designed to enable musicians to use their own music to create different experiences. Details weren't provided but we presume this works via real-time beat analysis combined with the option in OS 3.0 to play your own music in-game.

Introducing the game, Matsuura explained, "The rhythm action genre hasn't changed in 15 years. I want to break it open."

In terms of the gameplay, various spirals appeared on screen, which had to be tapped. Doing this seemed to change the music.

You can get some idea of the concept from the following video. 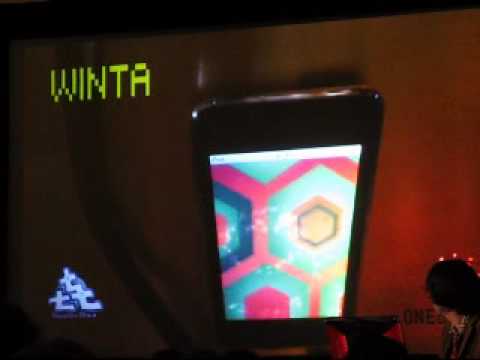 Still, as Matsuura pointed out, the game remains in a prototype stage as his studio NanaOn-Sha has outsourced coding duties to Dutch outfit Triangle Studio.

We'll be keeping our news radar tuned for further developments.

ngmoco and PaRappa the Rapper creators release WINtA on iPhone