Everything you need to know about Zed in Wild Rift

Zed is one of the famous assassins in the world of League of Legends and one of the most difficult-to-learn and play champions you can get your hands on. Zed has a number of skills that you need to time perfectly in order to make him viable, and his positioning matters a big deal.

Zed is one of the ninjas who started off in the Kinkou Order alongside Akali and Shen. He soon found himself venturing the catacombs of the temple he was once a student of and found an object that engulfed him in shadows. Those shadows shaped him into the dreadful and brilliant (at the same time) champion he is now, being able to manipulate his shadow in order to damage enemies and move with ease.

When it comes to gameplay, he's by no means easy to master. Of course, you can pull off a combo or two, but a truly great Zed player will make the right decisions based on more than just all-ins and damage. They will know when to roam and get kills, how to get ahead of opponents and maximise their advantages each time they're given the opportunity.

So, the bottom line is that I don't personally recommend him to any beginner. It will take tens of hours of practice to be great with him, and just one second to end up behind in farm and gold and be useless to the team.

In our Wild Rift Zed guide you'll find everything you need to know about the champion, from his skills and how to allocate them to his build, skill combo, and runes. This is what you will find in the Zed guide below:

Contempt for the Weak (Passive)

Zed's basic attacks against low health targets deals bonus Magic Damage. This effect can only occur once every few seconds on the same target.

Zed and his shadows throw their shurikens. Each shuriken deals damage to every enemy hit.

Passive: Zed gains energy whenever he and his shadows strike an enemy with the same ability. Energy can only be gained once per ability cast.
Active: Zed's shadow dashes forward, remaining in place for a few seconds. Reactivating Living Shadow will cause Zed to switch positions with this shadow.

Zed and his shadows slash, dealing damage to nearby enemies.

Zed becomes untargetable and dashes to an enemy champion, marking them. After a few seconds the mark triggers, repeating a portion of all the damage Zed dealt to the target while they were marked. Zed leaves a shadow behind and can reactive Death Mark to switch places with this shadow.

How to combo as Zed in Wild Rift

It's rather complicated trying to write down Zed's combos without any video proof, so the most useful resource in that regard would be, as per usual when it comes to Assassin champions, providing a link to someone who knows better than I how to play Zed - Assassin Dave!

He will briefly explain how his combos work and when to use each one, so check it out: 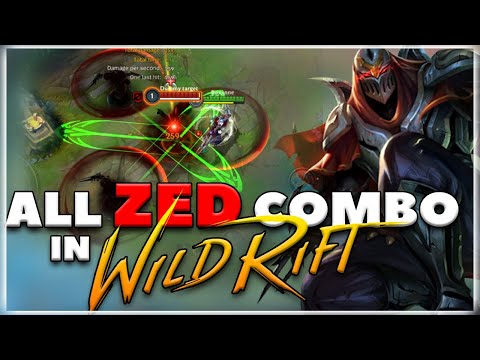 Wild Rift Zed - In what order to level up the skills?

For Zed, this is the order in which you want to level up the skills:

Keep leveling Skill 1 until it's maxed, then focus on Skill 3, and lastly on Skill 2. Don't forget to keep adding 1 point into your Skill 4 (ultimate) whenever possible.

The best summoner spells for Zed in Wild Rift

Ignite: Ignites target enemy champion, dealing 60-410 true damage (based on level) over 5 seconds and inflicting them with Grievous Wounds. (Grievous Wounds reduces healing effects by 50%). Flash: Teleport a short distance forward or towards the aimed direction.

The best build for Zed in WIld Rift

Boots:  Ionian Quicksilver is a great option if there is a lot of crowd control on the enemy team.  Ionian Stasis works well if you need to survive tower dives, although it's rarely used.  Ionian Protobelt is great if you want to have an additional dash forward and catch the enemies by surprise.

Not sure how good Zed is in the current meta? Then check our Wild Rift champions tier list!