The principal purpose of television adverts is to promote a company's products and services, but in some cases they are so amusing that they build a cult following.

One such commercial was the Barclaycard waterslide advert, which was so popular that it merited a free promotional game, Waterslide Extreme.

Its popularity has ensured that it spawned a sequel, but, although Waterslide 2 is a significant step-up from its predecessor, it fails to dispel fears that the concept is too shallow to sustain something more substantial.

For those who regard adverts as the annoying bit in between programmes, the aim is simple. You must guide a man, woman, or penguin down various large and elaborate waterslides located in a large metropolis.

You control your slider by tilting the iPhone left or right. If you take a corner too high, you run the risk of falling off the side.

Three stars are on offer for each level, and you earn these by collecting pearls, and by defeating the various enemies using power-ups such as bombs and stars.

Enemies include jellyfish, crabs, and octopuses, and they inflict debilitating maladies such as paralysis, which can only be remedied by shaking your iPhone or swiping the screen.

The increase in production values is evident in the presentation of the levels. Cartoony enemies contrast with the realistic 3D buildings and streets of the city, which can be viewed through transparent sections of the slide.

The thirty levels on offer are all of a decent length, and the incremental increases in difficulty – such as the addition of lower corners, more enemies, and awkward pearl positioning – manage to create multiple challenges to overcome, but stages still feel rather similar to one another. This contributes to a lingering feeling that the concept is limited in its scope.

It's impossible not to reach the finish, and so the penalties incurred by falling off the side or hitting an obstacle never provide a fatal blow to your run. You can reach the finish but still fail the level, which means that - although the objectives are difficult - the sense of difficulty never materialises during play, and this can be incredibly frustrating.

Additionally, for a game that prides itself on the speed of its gameplay, the absence of a target time to beat from the start is rather odd. This removes the possibility of multiple objectives, which would diversify the gameplay and increase its lifespan.

Fans of Waterside Extreme will enjoy the improved graphics and mechanics, but this added layer of polish isn’t enough to add depth to a shallow concept. 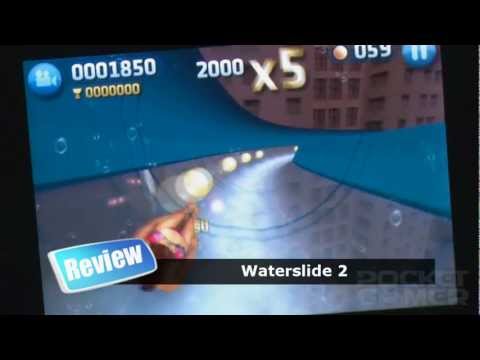 Impressive visuals and new levels ensure that Waterslide 2 achieves a degree of competency that eclipses its predecessor, but does not disguise its shortcomings
Next Up :
DC Worlds Collide review - "DC fan service in an enjoyable gacha package"

Fishlabs's Waterslide 2 on iPhone promises a 'faster, splashier' challenge than its hit predecessor