Warcraft Mobile release date and the rest you need to know

Warcraft Mobile, two words not many people expected to be used in the same sentence finally emerge from the shadows only to blow our minds at the creativity and charm of this upcoming mobile game. In today's article, we will cover everything that you need to know about this new Warcraft mobile game, better known as Warcraft Arclight Rumble.

If you're not familiar with World of Warcraft by now and consider yourself a gamer... that'd be a first. But that's perfectly fine, because we're going to dive into a few details about the world and story behind the game, as well as how Warcraft Arclight Rumble came to be. So without further ado, let's dive right in!

The narrative - not just another Horde vs Alliance battle

Warcraft Arclight Rumble will have its own narrative, but it's definitely not what a typical WoW fan might expect. The mobile Warcraft game has its own universe and plots since it's sort of a branch of the original (if we could even call it that).

In your journey passing through the stages, you will deploy various heroes in order to take down enemies and towers, in - what the devs would call - a tower offense type of game. The more levels you pass, the more of the game's universe and maps you will discover.

You can find popular worlds, such as Azeroth, Shadowlands, Outland and Pandaria to name a few, and if you're familiar with the original PC game, then you'll also find some of the elements featured in those maps familiar, at least to some extent.

Of course, Warcraft Arclight Rumble has been adapted for mobile, so just like we've seen from the trailer, you will not play with your own custom character, but rather amass a collection of all sorts of heroes, from all corners of the world, and deploy them as you see fit.

If you haven't had a chance to check out the Warcraft mobile game trailer, then we've included it below! Give it a watch before we continue out with our list of important pointers about the game. 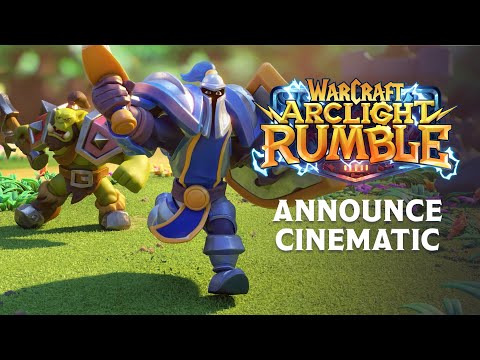 As you can see, even from the trailer we can easily tell (at first glance at least) that the game is pretty similar to some existing mobile games, such as Clash of Clans, Clash Royale, or any Clash-like TD game.

Can I play World of Warcraft on mobile?

World of Warcraft is a PC-exclusive game, and it cannot be played on mobile. It is an MMORPG, and there are many such games for mobile, but none of them are like classic WoW. The only Blizzard Warcraft game for mobile is the one we're covering in this article - Warcraft Arclight Rumble. This, however, is not an MMORPG, but rather a strategy TD game.

So the short answer would be no, you cannot play World of Warcraft on mobile, but you can play the Warcraft mobile game (which is Warcraft Arclight Rumble) once it comes out!

Right now we do have some information about the game, but only the basics. For instance, we know for a fact it will be a Clash-like strategy game, therefore we'll have heroes to collect and upgrade, several tactics to take into consideration when deploying the heroes, and multiple game modes.

Some of the key features of the game include:

At the moment, there is no set date for an official release date of Warcraft Arclight Rumble. The game is set to enter its closed beta stage soon, so we will hopefully find out more information then.

In the meantime, you can pre-register to stay up-to-date on all the latest news and announcements, and be the first to have a chance to get into the closed beta phase!