Developer gumi Inc. alongside publisher Square Enix has revealed the latest addition to the popular tactics game set within the Final Fantasy universe - War of the Visions Final Fantasy Brave Exvius. This addition is a brand new unit that players will be able to add to their ranks, a self-proclaimed God and founder of the Crystal Sanctum: Sadali Crysthea.

Sadali is an Ultra Rare unit, meaning he is the cream-of-the-crop and specializes in the Wind element. His in-game job is the Crystal Sanctum Founder, though he also sports the sub-jobs of Devout and Kotodama Wielder. But, if you’re interested in building your team around him, let’s go over the most important bit of all. The skills that he will be bringing into your composition. 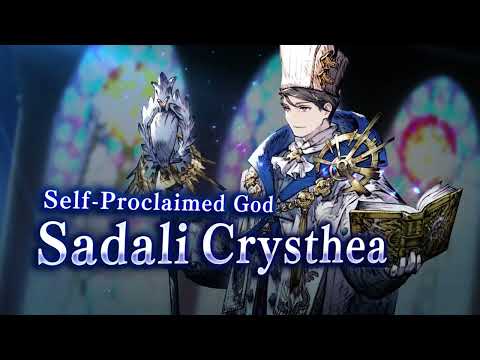 Sadali will have 3 skills, beginning with his Limit Burst - Crystallite Reckoning. This Limit Burst will cause Sadali to raise his Magic Attack Res Piercing Rate before he deals massive damage to the target based on his magic stat. This means that, if battling a unit with a massive amount of magic resistance, Sadali will pierce right through it and be capable of dealing huge amounts of damage.

Next, his skill Rush Not Thy Fate. This one will inflict a decent amount of damage based on Sadali’s MAG stat to targets in a large area, as well as reducing their CT and lowering their agility for one turn. And finally, Sacred Sacrament, which will raise all Elemental Resistances of allies within an area around himself and add status removals to attacks for up to three turns.

So, to sum it up a bit more simply, Sadali is a wonderful support unit with Sacred Sacrament, but is also equally capable of dealing huge damage both to individual targets and groups of enemies with his Limit Burst and Rush Not Thy Fate. Whether looking for a strong MAG-based damage dealer or a nice support to keep in the backlines, Sadali might just be worth rolling for.

If you’d like to try out War of the Visions yourself and get your hands on Sadali, you can find it for free on the App Store and Google Play.

Looking for more games like FFBE? Check out our Top 25 best JRPGs for iOS!
Next Up :
Soccer Manager 2023 opens up pre-registrations for mobile

War of the Visions FInal Fantasy Brave Exvius is celebrating its 2.5 year anniversary with collabs with sister games