Vivid Knight, the popular roguelike dungeon crawler on Steam, is out now on iOS and Android as well

In case you missed it, Asobism.Co.,Ltd has announced the official release of Vivid Knight, a charming roguelike adventure game that's out now on iOS and Android. Now available in over 170 countries, the strategic title lets players build their party, combine their knights' abilities and defeat bosses in randomly generated dungeons.

Vivid Knight tasks players with defeating the Black Witch by navigating a procedurally generated dungeon to rescue their friends from being turned into jewels. You'll have to collect jewels as you go through each level and harness their power to recruit them into your party. You can also upgrade the stats of your units with duplicate jewels you stumble upon in the dungeon. 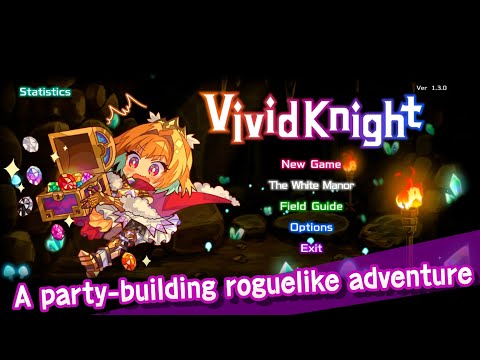 Players can also combine colours of jewels to unleash symbol abilities, so finding the right combination of colours and symbols lets you use different effects to boost your team's combat power. Apart from units, players can also discover hidden tools that unleash magical powers in these jewels, which can be a welcome boon when you're navigating the dungeon and taking down challenging enemies along the way.

With an overwhelmingly positive performance on Steam under its belt, Vivid Knight can now be downloaded on the Google Play Store for Android devices and on the iOS App Store. It's a premium title that costs $10.99 a pop. You can also visit the official website (or check out the embedded trailer above) for more info on gameplay mechanics and systems, or join the community of followers over on the official Twitter page to stay updated on all the latest developments as well.

Are you on the lookout for more similar titles that will put your skills to the test on your mobile device? Why not take a gander at our list of top 25 best roguelikes and roguelites for iPhone and iPad (iOS)?