Is Virexian another rogue-like space shooter with a neon finish? Well, yes, but it's a far-from-tired attempt with five dastardly difficult gameplay modes and oodles of weapons to scoop up and experiment with.

The game delights in frantic firefights, and its twin-stick controls are nice and smooth, which makes it easy for you to run circles around your enemies and pew pew pew to your heart's content.

And everything is set to a pulsing chiptune soundtrack that really gets the adrenaline flowing. 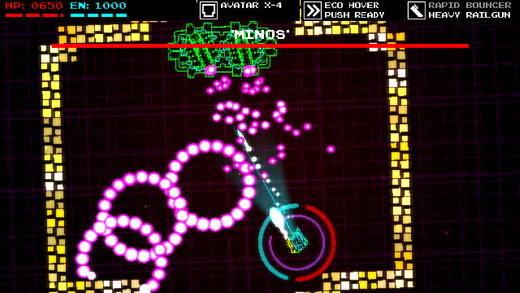 Virexian allows you to blast your way through endless swarms of enemy ships in five different gameplay modes. You can choose from three rogue modes of varying difficulty in which you try to complete as many levels as possible without dying.

Or, if you're more about survival, two arena modes will set you up against waves of enemies in a fierce deathmatch. There's plenty of variety for people playing at any level, with opportunity for some quality speed-running as well.

The game's controls are simple enough. Use your left thumb to drive your ship about, and your right thumb to rotate your ship and fire your weapon.

Double-tapping on the right side of the screen allows you to dash should you find yourself in a pinch. The controls are responsive, though mastering finer manoeuvres takes some practice.

You can rest your thumb anywhere on the sides of the screen, in case your fingers wander amidst the chaos, which is a nice touch. 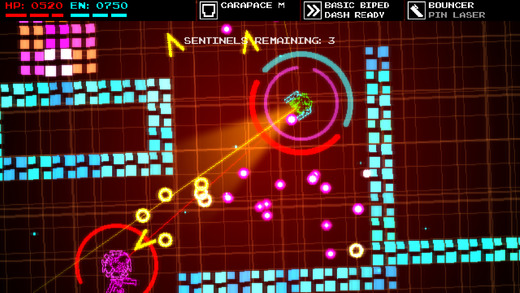 Shoot for the stars

Of course, your fancy moves are meaningless without weapons, and Virexian absolutely revels in them. You'll randomly stumble across an assortment of guns and lasers as you progress, each suited for different strategies.

There're your classic rail guns and machine guns, while specialty weapons like the "bouncer" send donuts of energy bouncing around the level, ricocheting off the walls and back into your enemies.

They're all fun to experiment with, and provide a good deal of variety to a game largely concerned with surviving endless waves of enemies.

You'll unleash your arsenal in any number of procedurally generated levels. Each map has a number of nooks and crannies that make for some excellent choke points, or wide open spaces if you want to do battle on the run.

It's important to take your environment into consideration when switching weapons, as the clever level design makes for some satisfying strategising.

Battle it out at light-speed

One of Virexian's only faults lies in its aesthetic. At first glance you might find it quite generic. Spend a few minutes with the game though, and it will sink its claws into you.

Its seemingly endless stockpile of weapons and randomly generated levels leave you with plenty to discover and ultimately master.

Give Virexian a chance, and you'll find a deep twitchy experience that can be enjoyed in small doses or obsessive, endless space battles.

Virexian will delight high-score chasers with its rogue-ish challenges and an impressive variety of weapons
Next Up :
Sumire review - "Why do some days stay in our thoughts forever?"