Struggling to survive? Our beginner tips for Vampire Survivors will help you get started.

Vampire Survivors is the latest pixel art roguelike to grace our screens, and although it’s deceptively simple at first glance, nothing could be further from the truth. Vampire Survivors hides a lot of depth and, without proper preparation, you might not survive long before your first, second, or tenth death screen. That’s why we’ve decided to put together a list of tips and tricks we wish we’d known before playing Vampire Survivors for the first time.

The goal of Vampire Survivors is to survive for 30 minutes. While that might seem simple, enemies will come at you in ever-increasing numbers, making this bullet hell roguelike tough to survive but deliciously moreish. Thankfully, you’ll level up and gain better weapons and abilities, helping you survive for longer… if you have your wits.

Death is a part of the roguelike experience, though. Embrace it. Learn from your mistakes. You’re going to die a lot before you even manage to survive into double digits.

So, if you’re just starting out in Vampire Survivors, take a look at our beginner tips for survival. Take these on board, and you’ll have a great start in this excellent RPG. Good luck out there. 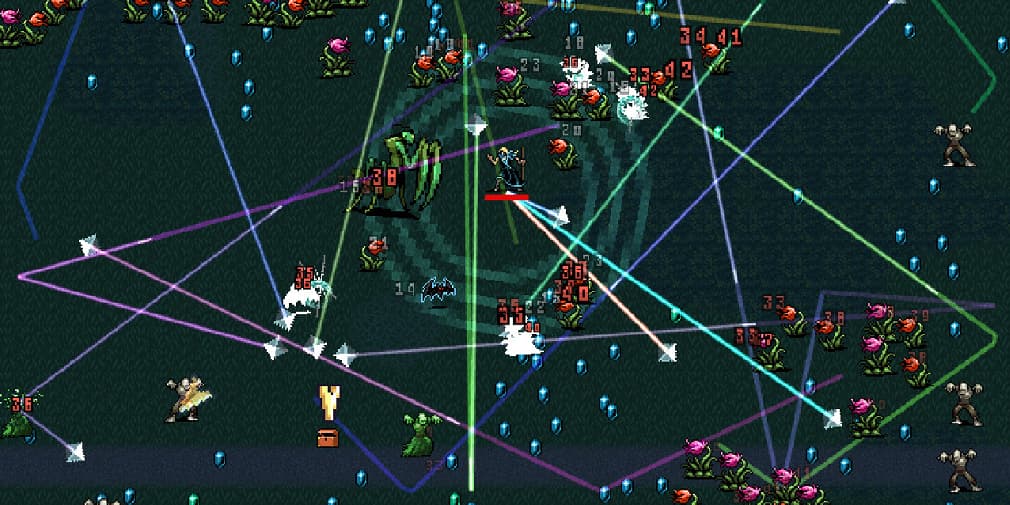 It might be tempting to play defensively (especially when you have hoards of bats flying at you with murderous intent), but it’s better to play on the offensive and kill enemies as quickly as possible. With this in mind, focus on choosing upgrades to your weapons and damage rather than more defensive options.

While laurels do help in the early game, upgrading your whip to hit from the front and back, or adding an ability to drop pools of holy water, will only help you progress faster before the enemy density ramps up. Also keep a lookout for the Garlic weapon, which adds a damaging field around you while also knocking back enemies. Keep upgrading this and nothing will be able to touch you! 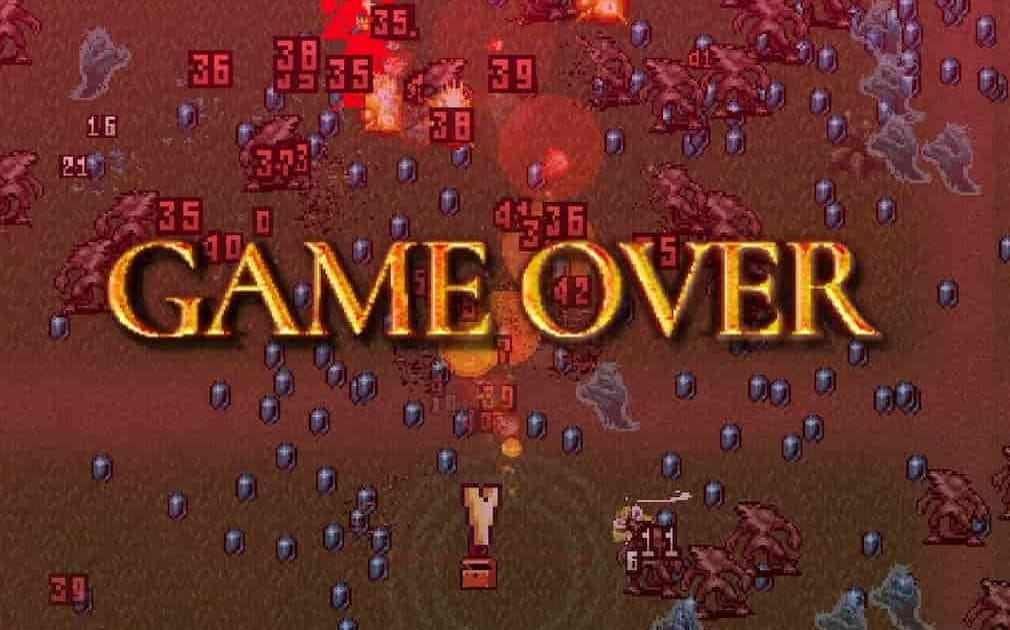 However, while you should play offensively, don’t rush headlong into danger if you see a shiny treasure chest appear, or to collect experience gems that drop from enemies. If you do, you can get used to the screen above. Item drops don’t disappear, so you can (and should) take your time to clear enemies or lead them away from drops. Most early enemies move slowly and in predictable ways, so taking a long way around and returning to drops when it’s clear will be much safer.

That said, having weapons like the aforementioned Garlic make it much easier to enter groups of enemies and still survive, so make sure you play to your strengths. Don't take unnecessary risks, but taking chances might just reward you in the long run. 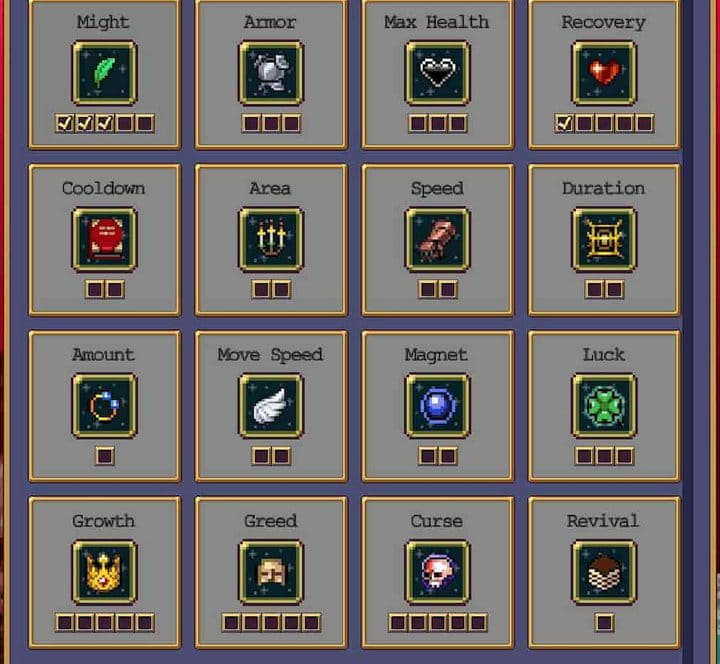 Death is not the end. Since Vampire Survivors is a roguelike, you’ll need to die if you want to upgrade your character and have better beginnings next time. When you die, you’ll be able to spend coins on permanent power-ups for your subsequent runs. With a ton of power-ups to purchase and 30 characters to unlock, you’ll soon find the beginning of your runs to be quite easy.

As for how exactly to upgrade your characters... that's entirely up to you. Since you're able to refund your upgrades, you have a little freedom. Still, have a build idea in mind after a few runs and you'll have a decent idea of how to invest your gold. 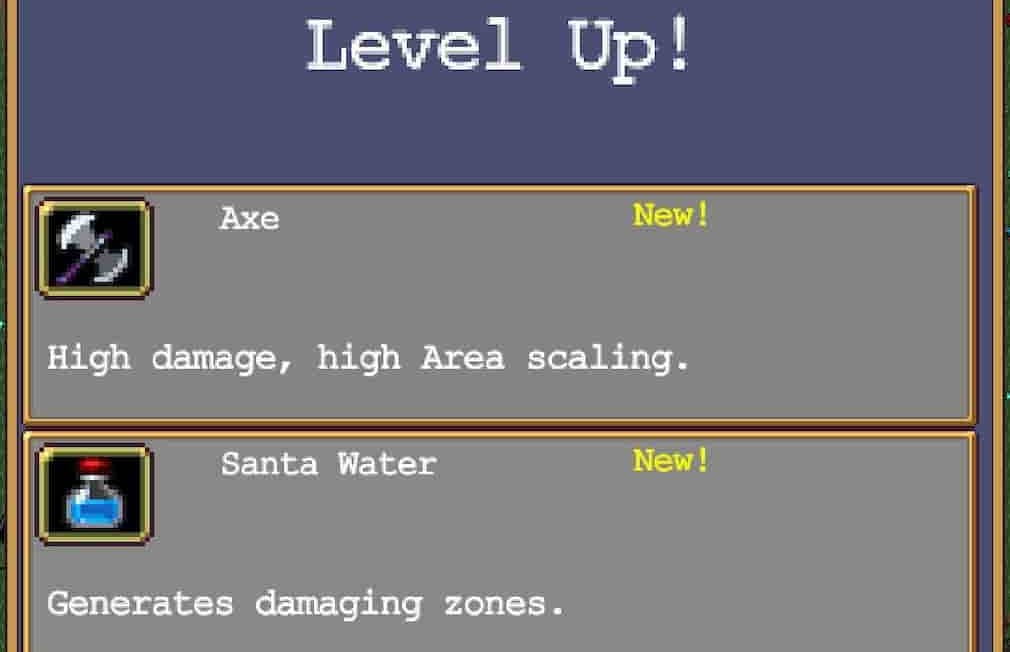 See those blue gems that drop from enemies? Those allow you to level up, gaining new skills or upgrades for the duration of your run. As we said previously, it’s important to grab these when it’s safe to do so. The more you grab, the more you level up – it’s that simple. The more you level, the better you’ll be at killing things coming your way.

But note the key phrase, there: when it's safe to do so. Taking a risk to grab experience gems will end a run quicker than you can say, "I want to suck your blood." So take your time, grab them when you're safe, and leave them on the ground if you need to while you kill more enemies and generate more gems. It'll be worth it in the end. 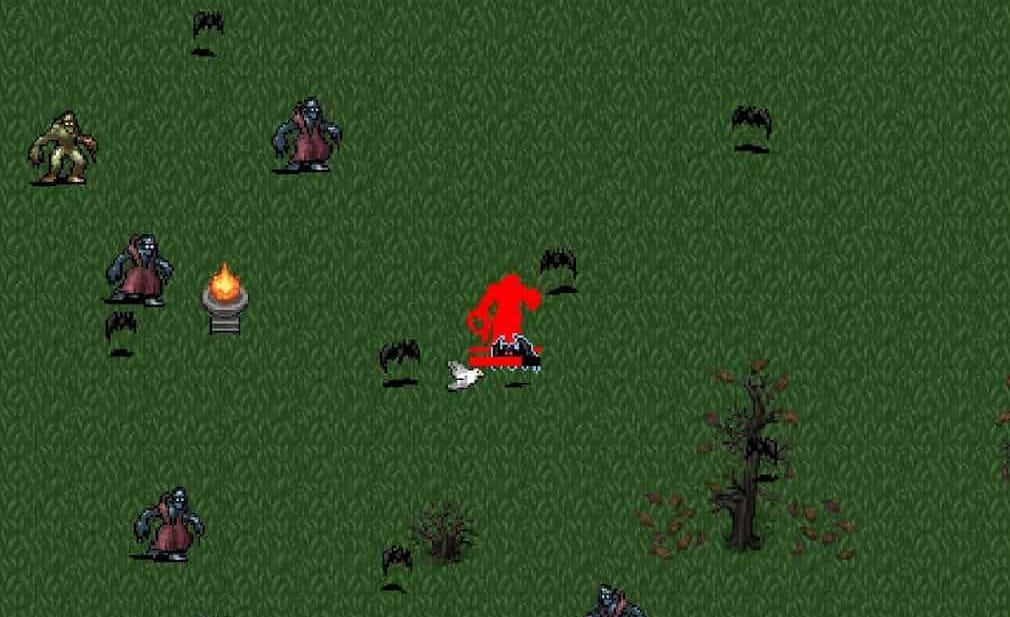 Look out for torches. Destroy them, and they’ll drop gold or, if you’re lucky, a healing item that looks like a roast chicken. These are invaluable, especially in early runs when you might struggle to survive without them. The game doesn’t clearly tell you they can be destroyed either, so we wish we’d been given this tip before we learned the hard way.

Soon, you’ll be seeking them out for some much-needed roast chicken, or hoping you get one of the rarer drops that’ll let you clear the screen of hoards of skeletons. Speaking of which…

6
Tip #6 - Look out for rarer drops from torches 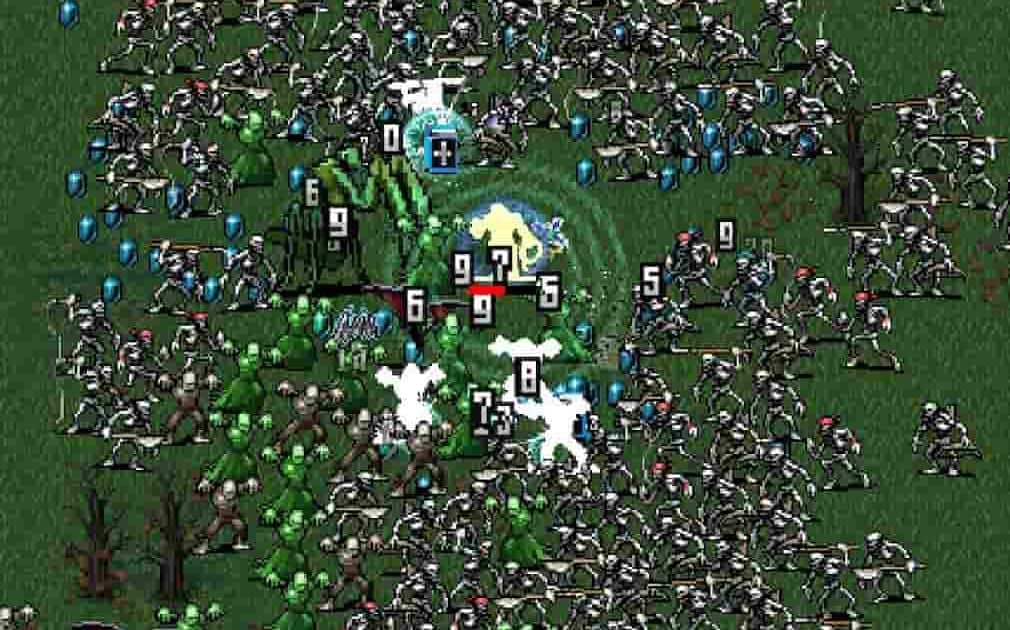 If you’re lucky, you’ll come across rarer drops when you destroy a torch. Learn to identify these quickly, as they can be incredibly powerful. The Rosary, for example, kills all enemies onscreen - even bosses. The Nduja Fritta Tanto is like a flamethrower, which is perfect for large groups of enemies or, again, bosses. And, the Vacuum makes all experience gems on the ground move toward you. Use this after killing a large group of enemies and profit from the easy experience.

7
Tip #7 - Choose a few weapons and stick with them 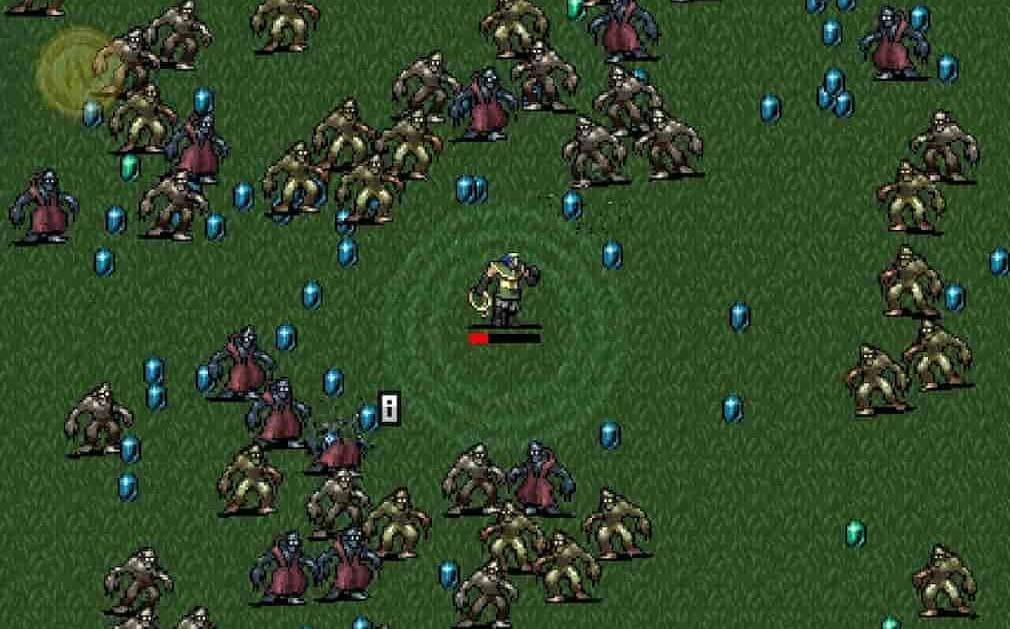 For every level you gain, you’ll receive either a new weapon type or an upgrade to an existing weapon. First off, try everything at least once and see what you like. Your initial whip might be weak at the beginning, but grab upgrades like the ability to hit twice, and you will automatically attack enemies from behind making getaways even better. Pick a weapon or two to focus on, and stick with upgrading those. Spreading your upgrades too widely will only end in disaster.

As we said earlier, some weapons might be better choices than others. We’ve grown to love the whip (especially when upgraded), the King Bible (which adds more swirling bibles when upgraded) and the Garlic (seen above) as excellent early choices. It’s all personal, though, so experiment! 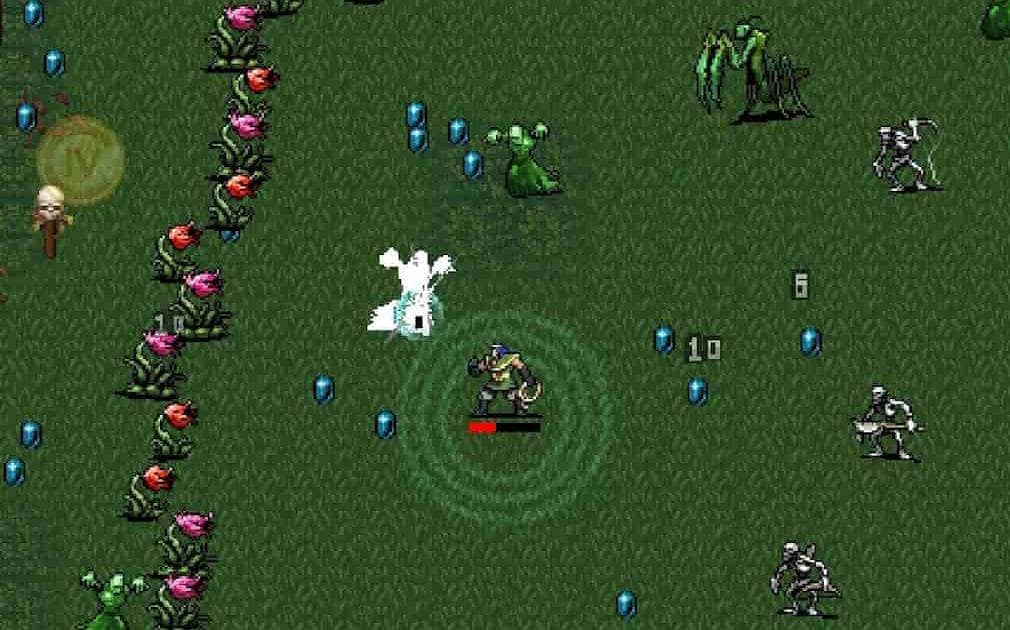 On each map, certain events happen at certain times, like enemy waves spawning, the boss spawns, or other items to improve your character. It’ll take you a while to learn the pattern, but once you do, it can help to plan your runs around these timers. For example, you’ll soon realise that a ring of dangerous plants encircles you at the five and 10-minute mark on the game’s first stage, so preparing for this is key.

Those are the best tips we have to offer in the Vampire Survivors guide to successfully conquer your early runs!

0/8
Next Up :
What are the best fighting styles in Blox Fruits

How to unlock Avatar Infernas in Vampire Survivors

How to unlock every secret in Vampire Survivors