While a lot of the focus of VR seems to be on experiencing other worlds and immersing ourselves in our favourite games, Disney animator Glen Keane is using VR to create them.

Keane steps into a virtual art studio using a HTC Vive headset and controllers and gets to work drawing some of his most famous creations from his 40 years with Disney with characters from movies including Little Mermaid, Tarzan, Duet, and Beauty and the Beast.

As Keane draws Ariel in this 3D space it’s more like he’s sculpting a 3D statue than a flat drawing on a page. As Keane himself says: “There are no edges to the paper”. 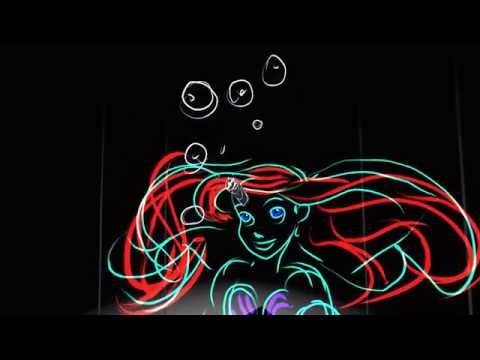 What does this mean for storytelling?” asks Keane, but the real question is what this could mean for games.

3D artists and modellers could use this to get a close look at the finer workings of their designs, but level designers could use to create this worlds from the inside too.

Dan Pearce, designer of 10 Second Ninja, thinks that for 3D level design the benefits of VR seem substantial, if the tools are intuitive enough.

“Currently one of the more fiddly parts of designing for 3D is using 2D inputs like a mouse. Combining the Oculus Rift controllers with level editing tools would rapidly increase the speed at which designers could shape out and iterate on 3D levels.

Videos like this show the capabilities of the technology, and it’s no surprise that everyone is getting on board the VR hype train with the technology being explored by a variety of markets, with the film industry, museums, and even Transport for London exploring the possibilities.

AlchiMerge will soon let you craft potions and build your own alchemy shop on the Vortex Isles, coming to mobile on June 7th