Unicorns on Unicycles is a physics-based fighting game where you do battle with jousting unicorns. It practically explodes with vibrant colours, making it stand out from most games on the app stores. But is there any substance beyond its affable art style? We sent our App Army in to find out.

Unicorn on Unicycle, what can I say, I love the graphics, I love the overall look, I love the sound and music, but I, don’t like the game. The game itself seems to start with it being really easy but by the second level, the game gets stupidly frustrating and the minimal, inadequate controls make you feel like you haven’t got much actual control over your unicorn or at least not enough control. Then there are the environmental dangers and effects that they could have left to later levels for you to feel like you had even a remote feeling of control over your character before you ramped up the difficulty, but nope, they are there from literally the second level.

I would only advise you to play this if you have a protective case on your phone as you are liable to scream things like “what!” “what the..!” “ that’s not what I wanted to do” and other more expletive-ridden phrases and probably throw down your phone in frustration. I actually purchased this prior to this AAA and opted for a refund within an hour. When I did play it, it seemed to recycle the levels pretty quickly as well, couldn’t have been more than a handful of levels before the same ones came round again. Pretty disappointed to be honest I had high expectations from the trailers and it (for me anyway) fell flat in the execution, let down by the controls more than anything else.

This game makes a decent first impression. Colourful graphics (though the art style isn’t great) and a nice sense of humour. Unfortunately, the game fails on controls and gameplay. Controls are incredibly frustrating. You tilt the unicycle back and forth using the on-screen buttons, attacking or retreating by pressing them together while leaning backwards or forward. This is infuriating because the slightest moment of out of balance crashes you and you have to start over. Several times later, any fun there was is gone. afraid I cannot recommend this one.

This game is one of the most aggravating games I have ever played. The idea is to dual with unicorns and the concept is actually quite good. The graphics and background music looked promising but where the game fell short was in the controls. I’m not sure if it was just me, because I was playing on a large screen, but I found the controls very hit and miss, making the duelling - very miss and rarely hit.

On the occasions where I did win I had a feeling, it was more by luck than skill. I wanted a duelling game with plenty of action but I found the controls took away any enjoyment and even after returning multiple times, I still couldn’t get the hang of it. It’s a shame - it was a game that I wanted to like.

Could not play this game at all. Got past the first screen of the tutorial, and on the second I ca?t get any movement at all. The same goes for the Adventure mode, just stuck with no input working at all. The VS is the only mode that I could get to work, but that is too little to give me any real impressions.
I also got my daughter to try the game on her iPhone 11 Pro Max, and she got the same results ergo no movement. Sad, as the game looks cute with bright colourful graphics. 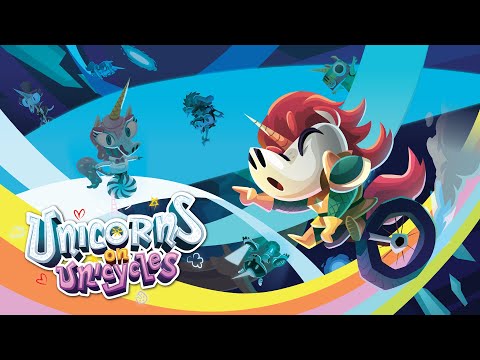 I was kind of intrigued by the concept and visuals for this game. Jousting in an iPhone game is a really cool idea, and the idea of it being unicorns on unicycles is also cool. Where my problem is, is that the difficulty is ramped up early and devilishly. Yes, there are still ways to win as you’re being pushed up into the air on a jet of air... but it took me a while to figure all of that out, as I’m trying to resist throwing my beautiful new iPhone against the wall. I saw a “vs” mode, so I clicked on that, hoping for an online multiplayer experience that might be less maddening.

But that “vs” is “share the screen” mode that I’m guessing they intended for tablet players. One more thing that can stand improvement is having to click through the same opening dialogue every time you’re forced to retry a level. I’m frustrated enough at that point that I’d like to see a “skip” button.
There is a lot to like about this game, and I haven’t given up on it yet. But I think it could stand improvement. Stretch out the difficulty climb. Online multiplayer. And the ability to skip over dialogue. I do recommend trying this, but understand that there’s going to be a lot of retries and maybe some frustration along the way.

Unicorns on Unicycles is one of the most creatively unique fighting games I’ve ever played. This is a physics-based fighter where you joust your opponent as a unicorn, all while trying to balance on a unicycle. The controls do take some time to get used to, but that’s part of the designed challenge to this brawler. And once you do, they make for some really intense moments while you are trying to get that final blow.

My favourite part of Unicorns on Unicycles is the beautiful cartoon-style graphics, the colours are vibrant and they make for a real treat to the eyes. I loved the varied backgrounds and there’s plenty of modes and unlocks that add replayability. The more I played, the more fun I had. Two horns up!