Check out the trailer for Unicorns on Unicycles below: 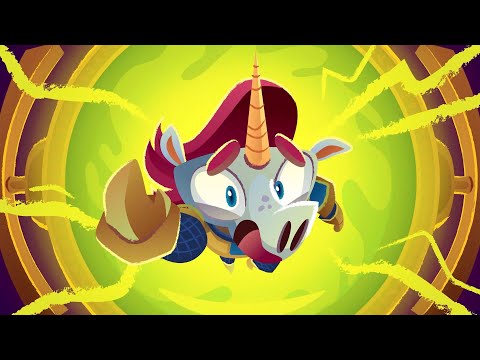 The game literally involves unicorns jostling on unicycles. What could be funnier? It’s packed with wacky physics and unicorns trying to pull off a balancing act on their unicycles while also fighting each other. There are one of two modes to choose from. The first is the single-player mode where players have to hop onto their unicycle and embark on a fun-filled adventure through a colourful multiverse.

Option two is local multiplayer madness where you can challenge your friends to crazy battles. With over 30 unique worlds to choose from, you aren’t going to put this game down soon. These locations will become unlocked as you progress and they’re designed to ensure plenty of chaos. Unicorns on Unicycles gives you the opportunity to humiliate your friends in numerous different ways.

It's not just the battlegrounds that are unlockable. Why play with only one kind of unicorn when you can play with many? The big bad of the story is an evil wizard named Rumpus. He has captured all the unicorns and enslaved them. You are one of the few that remain free and save your fellow species from Rumpus. And that’s what you will do. Doing so will allow you to play as the same unicorn in both single- and multiplayer modes. Like the locations, all the different unicorns will be just as unique.

There has to be a learning curve if you are a unicorn on a unicycle, right? Players must first learn how to balance on this tiny vehicle. Master this and soon enough, you’ll be baiting, dashing, parrying, riposting, and piercing your enemies.

Unicorns on Unicycles officially launches today, September 28th and can be downloaded from the App Store and Google Play for $3.99.

Check out the best multiplayer games to play on mobile!
Next Up :
Free Fire Max is now out on Android and iOS worldwide