At first, Typoman may look like Limbo, which is no bad thing. But it turns out it works a little different. In fact, it may even warrant a comparison to Scrabble.

The dark world of this 2D platformer is one constructed out of words and letters. The character you play as, for example, is made out of the letters that form the world "Hero."

Other creatures and objects in this world have a similar word-based anatomy. If you put letters together then they become the word that they form.

This is the basis upon which Brainseed Games has designed a treacherous series of tests that will put your character's survival at high risk.

One early puzzle sees you pushing the letter 'O' to the letter 'N' to form the word 'ON'. This then powers the word 'PLATFORM' next to it, turning it into an elevator that you can ride to reach higher ground. 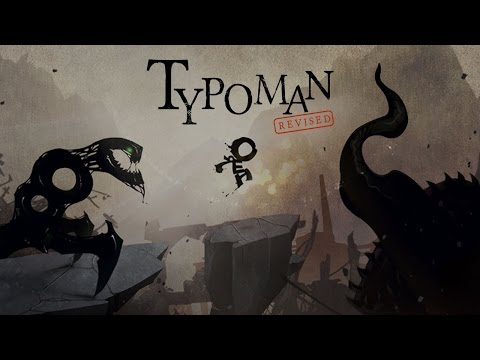 As the game progresses, you'll need to figure out puns in order manipulate the environment in ever more dangerous scenarios.

It's a cool idea and, by the looks of it, one that has been realised with style.

According to Typoman's PAX Megabooth page, it should be on its way to iOS, Android, and PS Vita, as well as PC and other consoles.

Fingers crossed that's still the case as we'd love to give this a look on our touchscreens. You can find out more about Typoman on its website.

Thanks Christian V.
Next Up :
The Walking Dead: All Stars, a brand new hero collection RPG based on the popular comic series, releases later this year