Tropa Mágica The Game brings the band to mobile, coming to iOS and Android on January 14th

Super8bitRafa has announced the upcoming release of Tropa Mágica The Game, its new arcade game on mobile that features "psychedelic-cumbia-punk" band Tropa Mágica. Coming to both iOS and Android devices this January 14th, the retro title brings the fun vibes of the band to a pixel art platformer in style.

Tropa Mágica The Game is based on the real-life band and will appeal to its Spanglish-speaking fans. The side-scroller boasts charming pixel art graphics ("so low res even a toaster could run it") and a wacky platforming adventure where players will step into the shoes of the Pacheco Bros to fight a bunch of evil space aliens. They'll have to do whatever it takes to retrieve their stolen albums and drive the interstellar invaders back.

Players can expect to platform their way through twenty-five levels with more than a dozen songs from Tropa Magica playing in the background. Cutscenes reveal the original storyline as you leap your way through bottomless pits and avoid buzz saws at all costs. You can take a little sneak peek at the psychedelic action in the embedded gameplay trailer clip below. 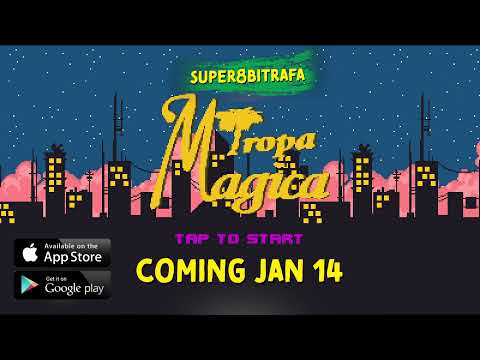 If you're eager to give the game a go, Tropa Mágica The Game is available to download on the iOS App Store or on the Google Play Store for Android devices. It's a free-to-play game with in-app purchases. You can also head on over to the game's official Instagram page, or join the community of followers over on the official Facebook page to stay updated on all the latest developments.

Are you on the hunt for more platforming titles on your mobile device to put your skills to the test? Why not take a gander at our list of the top 25 best platformers for Android phones and tablets?

Next Up :
Poker Tower Defense, a mix of classic Poker and tower defense, is out now on Android and iOS

Undestroyed: Tips to help you tackle this robotic roguelike

Poker Tower Defense, a mix of classic Poker and tower defense, is out now on Android and iOS

Idle Huntress is an online JRPG where you collect, enhance and socialize with huntresses, out now in select countries