Tiny Defense 2 continues in a similar vein to its predecessor. It's more polished, and throws a few more ideas into the mix, but it's still a side-on tower defence game.

And that means it's still hamstrung by some of the problems of the original. There's a slight lack of urgency, and the tactical depth of a normal TD game isn't as prominent.

There's fun to be had here though, and it's certainly a step up in terms of scale and ambition. Just don't expect to be completely blown away.

You're in control of a number of different robots. You need to spend energy to use them, and you earn that from generators you place around the level.

Waves of bad guys trundle in from the left of the screen, and you need to take them out before they reach your base. You lose HP if they do. Lose it all and it's game over. 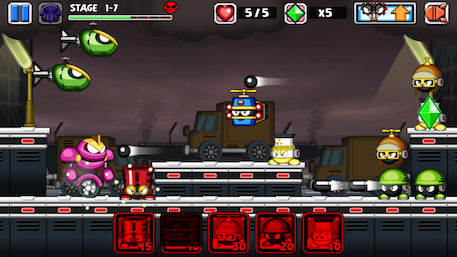 You can only take a limited number of these into battle though, so you need to check what you're up against and plan accordingly.

There are three different difficult settings, and if you're a tower defence veteran, you're going to want to skip casual altogether. You just won't have any fun. 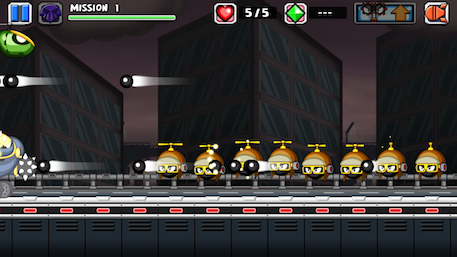 Here and there the game throws in a few twists. There are levels that are more like straightforward shooters, and you can upgrade your arsenal with different powers.

It's all pretty standard, but it's well put together, and if you're a fan of the genre you're going to have a lot of fun playing it.

But if you're not a convert to the tower defence call, this isn't a game that's going to change your mind. It's a little too standard, a little too safe, and a little too familiar.

The additions aren't really impressive enough to shake the game from its comfortable place on the App Store. It's fine, and it'll keep fans entertained, but it's never going to be anything more than that.

A decent tower defence game, but Tiny Defense 2 doesn't offer anything more than that
Next Up :
Sumire review - "Why do some days stay in our thoughts forever?"

Tiny Defense 2 shakes up the template of the original, out now for iPhone and iPad