Bit By Bit Studios has announced an upcoming dungeon crawler-slash-tavern simulator titled Thirsty Heroes, with a planned release for mobile, PC, and the Nintendo Switch. The game features deckbuilding combat as well and will require players to use their strategic prowess rather than their quick reflexes to succeed.

Featuring a low barrier to entry, Thirsty Heroes will let players pick their difficulty level and dungeon length, making the game very accessible for all kinds of players. They'll have to manage their bar and hire patrons at the same time in order to upgrade them and go dungeon crawling for procedurally-generated loot.

To make sure that everything is simplified, the game will have three inventory slots instead of eight, and will only have three hero attributes instead of five. Deck sizes are also only limited to twelve cards, with a rock-paper-scissors mechanic during turn-based combat. 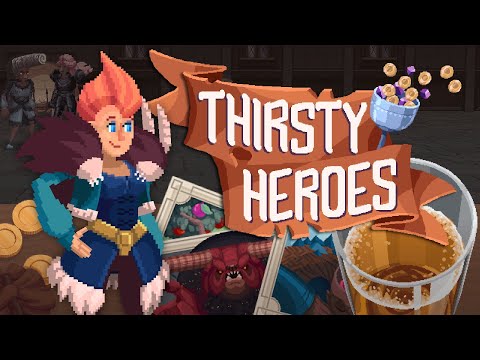 The game also features a humourous and lighthearted narrative - plus, since players have to keep heroes happy and well-served behind the bar, heroes will eventually reveal their skills, storylines and even their negotiating tactics.

Thirsty Heroes is currently 180% funded on its Kickstarter campaign, with two days left to go. The price for the game is yet to be determined, but it will supposedly have no ads, no in-app purchases and no analytics. It will also feature cross-platform saving across mobile and PC. If you're curious to see what the game is all about, you can have a look at the embedded trailer above to get a feel of the title's charming visuals and gameplay.

Are you on the lookout for more similar titles that will put your role-playing skills to the test on your mobile device? Why not take a gander at our list of the top 25 best RPGs for Android phones and tablets?

Next Up :
Draw It goes over the 100-million-downloads mark and becomes Kwalee's most downloaded game