The Sims series hasn't evolved too much since its debut a couple of decades ago, so hardcore Simmers know what to expect from each new spin off. The Sims Medieval is simple, fun, and, most importantly, adapted well for the mobile.

Like other Sims mobile games, you create a character and have him or her go through everyday adventures, albeit in a more streamlined way than the home versions. In The Sims Medieval, you build your character's body from about a dozen different physical points.

The personality development has fewer options, but more importance in the game. Your character can go four ways: Gentle, simple, naughty, and orphan. It affects your quests, as the gentle, easy-going guy will have different interaction options than the defensive, guarded orphan.

The quests are appropriately dark age, though it still feels like The Sims put in shining armour. You move across the land, making friends (or enemies) via the dialogue and action boxes. Say or do the right thing and the person will give you a quest.

The one new wrinkle here is the fighting. Set up in a Prince of Persia-esque side-on view, The Sims Medieval's battles are all turn-based. These are welcome but all-too brief arcade diversions.

The Sims Medieval manages to do everything right, from the touch controls to the solid visuals. Folks interested in The Sims will love it. However, gamers not previously won over by The Sims won't find anything to get excited about. 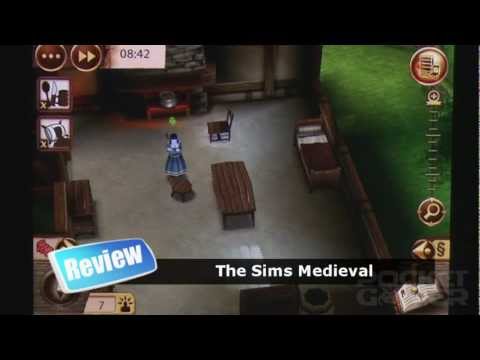 The Sims Medieval is a good Sims game, but it doesn't bring much new to the series
Next Up :
Backbone One review – “Turn your iPhone into a games console”

Hands-on with The Sims Medieval for iPhone