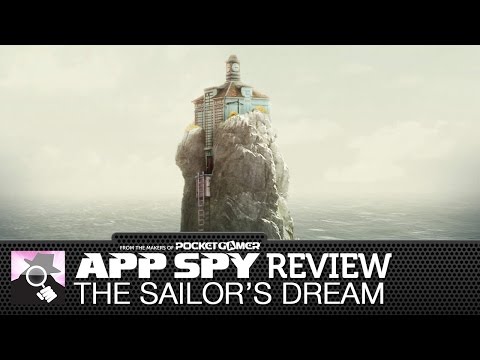 There's this label in PC gaming - mostly derogatory, though some have adopted it as a positive term - to describe games that ignore combat, puzzles, and challenge.

They're called walking simulators. They're more like vaguely interactive worlds than games - they tell stories, but they're not interested in winning, losing, and kill streak bonuses.

Normally, I love these games. I tip-toed through the eery house of Gone Home with impish glee, turning over each bootleg VHS of the X-Files in the hope of finding a little more about the Greenbriar family.

But something about The Sailor's Dream - Simogo's first walking simulator. Or perhaps, more accurately, rowing simulator - left me a little cold.

You start your adventure in the middle of the ocean, surrounded by interesting locations like a towering lighthouse, or a shipwreck snagged on a rock.

You can visit these places with a swipe, and then explore a maze of rooms, corridors, and creaky staircases.

You only need to track down the exit to "finish" the area but you can also find interesting objects that reveal a snippet of story.

As it turns out, piecing together these fragments of narrative and trying to find out what events transpired in this eery little archipelago is the real purpose of the game.

The story is intriguing and wonderfully told in a variety of different ways - including straight prose, text that eminates out of books like a ghostly flame, voice clips, and beautiful folk songs by Jonathan Eng and Stephanie Hladowski.

But the tale is also criminally short and shallow - more like a breezy poem or nursery rhyme than a novella. You'll figure out the narrative in no time at all, especially as there are often multiple versions of the same story beat to ensure you don't miss anything.

Go back to sleep

You may find yourself discussing the finer points, the subtext, and the real meaning of the story, but there's not much here to hang your pontification cap on.

The Sailor's Dream is astonishingly brief. Yes, there are certain parts that take hours or days of waiting to unlock (unless you diddle your internal clock), but the time you'll spend inside the app will be a little over an hour if you don't dally.

You are, of course, encouraged to dally. And dilly. The game is made for curious lingerers, as each screen is packed with hidden details, audio cues, and objects.

There are also intriguing interactive elements like star charts you can manipulate, and hanging decorations you can tweak.

Though, those are often more aggravating than playful: in any other Simogo game they'd be puzzles that unlock extra secrets. But here, they're just red herrings that - as far as I can tell - do nothing.

I'm of two minds about The Sailor's Dream.

I love the world, the attention to detail, the production, and the folksy aesthetic. My first pokes and prods within the game were made with joy as I explored new areas, discovered new things, and started to unravel the story.

But then it became much less enticing. I knew everything there was to know about the story, explored every nook and cranny of the world, and uncovered all the secrets. And I was left disappointed.

The Sailor's Dream is a gorgeous, meditative experience with heart and soul. But it's lacking in substance, depth, and meaningful interactivity
Next Up :
Star Discord review - "Needs polish, but it's shaping up to be a true RTS on the go"