If there's one lot of people in the industry who, by and large, really tend to get horror right, it's indie games developers.

These are the people that brought us the likes of Amnesia and Lone Survivor, while pretty much everyone else in the industry messed around turning their horror IP into action titles.

So perhaps my expectations for The Long Reach from Ukrainian developer Painted Black Games were a bit high, but then again so is the difficulty of the game, and honestly I didn't get that far in before giving up (and also having to hit a deadline).

The title sees you cast as research assistant Stewart, and you have try to survive after some kind of infection breaks out in the game's small-town America setting.

To do so sees you trying to solve a series of puzzles adventure game-style. The end result is something of a mixed bag. Often times you find yourself just trying to fathom out the game's logic.

You'll move from room to room, mashing the interact key at anything that displays the golden outline that indicates you can do something with it.

Then you'll search through your inventory to see if anything works. After a while the whole things becomes flat out frustrating, and it's one of the reasons why I spent so long in the early stages of the game.

This isn't helped by the game's art direction. I'm a massive fan of pixel art and what is on display here is absolutely gorgeous. Yet this - combined with the dark lighting in effect - can make it quite hard at times to see just what's going on.

Yeah, I know this is a horror game, and poorly lit areas are part and parcel of the genre, but it does actively get in the way of the gameplay in this instance, leaving you dislocated from the landscape you're exploring.

It is clear that developer Painted Black gets the tropes and moves of the horror genre - the use of sound here, for example, is absolutely stunning. 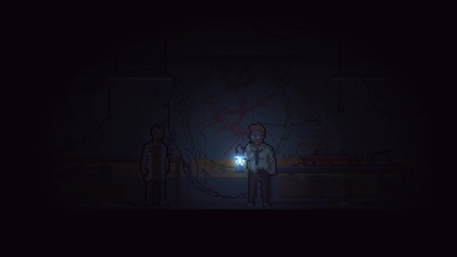 The Long Reach's audio really conveys an unsetting and uncanny vibe that does gel with what's happening on the screen.

Plus the character you play is incredibly vulnerable. Going toe-to-toe with enemies will lead to a swift death, which creates a 'sneak-n-hide' experience that isn't a million miles away from Alien Isolation.

There's no voice acting here, with all narrative being conveyed through text. The writing is generally okay, but it has a tendency to undercut the very real, bloody, and serious happenings of the narrative with humour. This sometimes works, diffusing the horror when it's at its most excruciating, but most of the time it just feels out of place.

There's a lot to love about The Long Reach - it's clear that the team behind the game really understands the horror genre. This is an unsettling and compelling experience, with a fantastically uncanny and creepy atmosphere.

If you're a fan of mashing everything in your inventory with everything you can interact with in the world, then you're going to lap it up. If not, it's probably wise to give The Long Reach a wide berth.

Fans of classic point-and-click adventures will feel right at home here, but anyone else might find The Long Reach a little flat
Next Up :
Jade Order review - "An puzzling path of the warrior"