In The Light Inside Us, your weapon is also your life force

iOS + Android
| The Light Inside Us

When I first saw a glimpse of The Light Inside Us at Casual Connect last week, my thoughts wandered to games like Edge or Rymdkapsel.

All three are stylistically minimal and colorful games that involve moving little shapes around abstract slabs of land floating in some mysterious void.

While I love the strategy of the aforementioned games, I was actually pleased to find that The Light Inside Us is an action game, and a fun one too. It combines the quick-thinking of tower defense, the planning and timing of a fast-paced strategy games, and the satisfaction of shoot ‘em ups.

In it, you control a ball of energy made up of tiny cubes. You earn more cubes by killing enemies, but you also lose them by attacking. That’s because attacking involves sacrificing a certain amount of your own cubes, which varies depending on what ability you’re using.

You have to be careful about not spamming attacks, too – run out of cubes, and it's game over.

The single-shot is a sure way to manage your supply, but it’s harder to earn back cubes unless you can line up several enemies in one shot. The spread shot can catch more enemies in its range, but uses significantly more cubes and should only be used on large crowds of opponents.

Some maps give you the option to swap between abilities by crossing over a colored square of light, while other maps place the abilities in ways that are impossible to avoid, so adapting to unexpected scenarios with certain weapon types becomes required to survive.

You can also lose cubes by colliding with enemies, so you’ll have to keep moving around the map as waves of opponents pour out of their spawn point to avoid getting overtaken.

All these mechanics generate a tense trade-off system that merges offense and defense all into one. 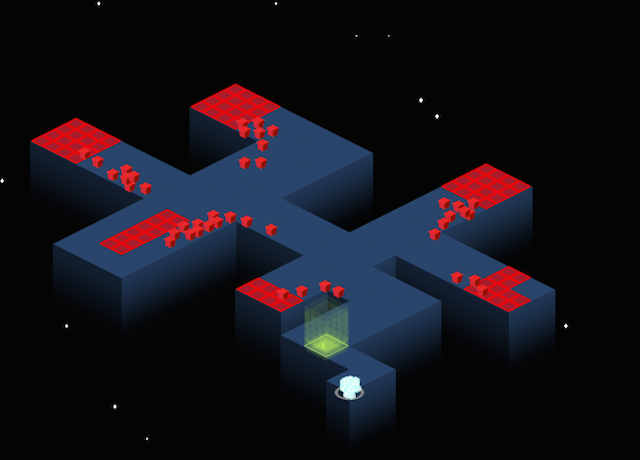 The creators at Dastan Games tell me a full build of The Light Inside Us is a few months away. It’ll be out on iOS and Android.

For now, you can keep up with development over on TIGSource or try out the free demo over on Google Play.

The Light Inside Us shows how you can be a jack of all trades, and a master of all

Your weapon is your life in abstract strategic shooter The Light Inside Us, out now on iOS