Basements have often been fodder for scares and disturbing secrets in horror movies, but most of those dank underground spaces would pale in comparison to the terrors found within Binding of Isaac's.

Within Isaac's multi-level cellar awaits grotesque monstrosities, piles of rot and viscera, and walls of flesh; horrific things that must be destroyed with the power of your tears. Edmund McMillen's popular roguelike shooter finally brings its surreal and gross brand of chaos to iOS, and despite some lingering control and UI issues, the randomized gauntlets remain as addictive and thrilling as fans would hope.

Poor Isaac has fled his insane Mother and her plans to sacrifice him, descending into the basement to escape. Binding of Isaac drops you into the randomly-generated basement stages, where each new room could offer a powerful upgrade, some weird secrets, or a horde of enemies to defeat.

The core of the game is its vast varied pool of items, each one granting both a cosmetic change on Isaac and some buff, debuff, or change to your attack. Your speed and health can be increased. Your base tears can evolve into a spread shot, or a single tear you control directly, or a powerful laser, or imbued with poison. In fact, your attack can gain all of those attributes simultaneously, since effects stack. Limited-use skills and consumable pick-ups like pills and bombs round out your potential loadout.

While upgrades collected throughout runs won't persist between attempts, you do gradually expand the overall pool of items and unlocks, allowing for more powerful and insane builds in later runs. It's this relentless pace and gradual drip feed that can hook players for dozens of hours; there's always something new to discover, to work towards, whether it's more items, new rooms to survive, new enemies and bosses to kill, new characters to unlock.

Binding of Isaac comes to iOS not only with all of the content present in 2014's Rebirth remake, but also myriad changes designed to make the shooter play well on mobile. And for the most part, it works surprisingly decently.

Playing in portrait divides your iPad in half like a 3DS, with the gameplay on top and the map screen below. The auto-fire option lets Isaac fire continuously in a set direction. In fact, I found auto-fire as the best way to play, since it allowed me to focus more on movement in the midst of the chaos. 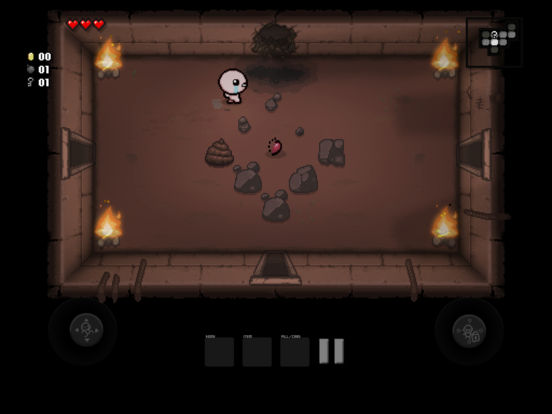 That's important because Isaac's touch controls can feel loose and floaty, which can be an issue in area with spikes or cluttered with rock walls. In a game where health can be so limited, it can be frustrating to lose half a heart due to unintentionally moving too close to danger or getting caught against a wall for a second too long.

Thankfully those moments aren't common and the iOS version comes with controller support, so if the touch controls prove unwieldy, you have additional options.

But even those issues can't completely diminish the innate addictive nature of Binding of Isaac's gameplay and unsettling world. Die, die, die again, and those tense battles, weird enemies, hidden secrets, and wonderfully over-the-top items will draw your finger to the restart button once more.

Even with some control issues, Binding of Isaac's wealth of depth and secrets make it a must play for fans of roguelikes
Next Up :
Hindsight review - "Deeply emotional but a tad repetitive"