PONOS Corporation has announced a new update to The Battle Cats, the wonderfully weird casual strategy game on mobile. With a whopping 64 million players across the globe, the game is welcoming the Year of the Tiger with a bunch of limited-time events and special campaigns for some cool in-game goodies.

From January 17th to February 14th, The Battle Cats fans can test their skills in the event-exclusive Lunar New Year stages to nab Cat Food premium currency, special discounts on Rare Capsule Cats and more. You'll have to build your odd yet adorable feline army to take over the world, and with the special 777 Cat Food free gifts from now until January 31st, you can draw from the Wildcat Slots for more prizes up for grabs this season. 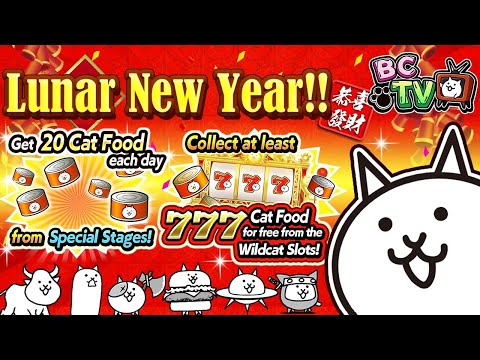 Meanwhile, the Lunar New Year's Event lets players check out the “Lunar New Year” map that appears once every day until February 14th. Here, 20 Cat Food cans are given away as rewards after clearing each stage. You can then exchange these at the Rare Cat Capsule Machine to pull mighty warriors from the Cat Empire. To top it all off, the one-time special Lunar New Year discount lets you pull an 11-capsule draw for half the price.

Ready to try your luck? If you're keen on joining in on all the festivities, you can download The Battle Cats on the iOS App Store and on the Google Play Store for Android devices. It's a free-to-play game with in-app purchases. You can also visit the official website to stay updated on all the latest developments.

Are you on the lookout for some similar titles you can get into on your mobile device? Why not take a gander at our list of the top 25 best tower defence games for Android phones and tablets?

Next Up :
Tales of Luminaria will release a full-length animation on January 20th, with a ten-minute preview you can see right here