The new animated Addams Family movie comes to cinemas next month and that can only mean one thing. There will be a mobile tie-in game. Enter The Addams Family Mystery Mansion, a game where you will be able to build and decorate your own house for Morticia and co to inhabit. The game is set to release on October 9th for iOS and Android.

Though the character designs match those from the upcoming film the game will feature an original story. Morticia and Gomez return home to their mansion to find the rest of their family missing. It'll be up to the player to reunite them all by playing through the different chapters. It promises to make good use of the witty dialogue people expect from the Addams Family.

Alongside collecting all of the characters from the film, players will also be able to expand the mansion and unlock new furnishings to decorate it how they choose. So if you've ever found yourself wanting a spooky house to decorate, this could well be the game for you. You'll be able to choose from a variety of decorations from suits of armour to carnivorous plants, as well a more normal furnishings such as armchairs, though they'll still have a spooky look about them. 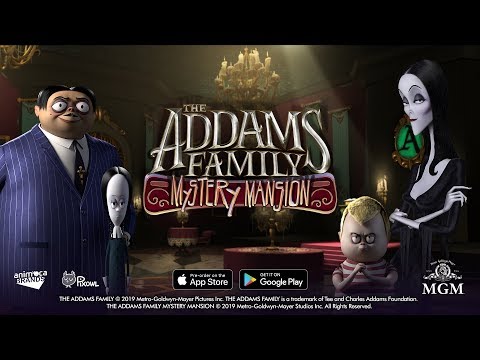 There will potentially be levels where you'll have to decorate the house with particular items though, rather than having free rein over the design. To meet their various needs you'll have to craft certain items especially for different members of the family.

It will be a free-to-play game with in-app purchases. Judging solely from the screenshots this appears to include skins for the characters but will likely include the two currencies the game looks to have as well.

The Addams Family Mystery Mansion will be available on the App Store and Google Play on October 9th. You can pre-register now on both storefronts if you'd like.