Tesla Force lets you battle cosmic horrors in a roguelite shooter, out now on Android after its release on iOS

Fans of the madcap mayhem of roguelite shooters are in for a treat as Tesla Force blasts into Android devices today. 10tons' hit twin-stick top-down mobile title invites players to dive into hours of crazy shooting through procedurally generated levels using the brightest minds in history.

After its release on iOS, Tesla Force is now available to download on Google Play as well with a price tag of $5.99. Players can step into the shoes of Nikola Tesla, Marie Curie, H.P. Lovecraft, or Mary Shelley and face off against hordes of baddies using awesome weapons and devastating technological gadgets. You can blast away with the X-Ray Blade, Jacob's Ladder on a Stick, the Tesla Turret, or a Battle Mech to defend against unspeakable cosmic horrors. 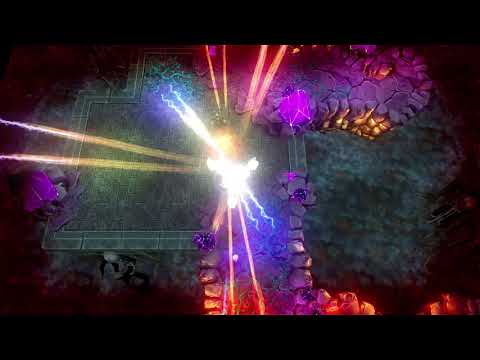 "The audience has been warming up to Tesla Force during the past year. The start was slow, but after adjusting for player feedback, the game is now taking its place in our lineup. If you're looking for some polished twin-stick top-down shooting madness in a science fantasy setting, the game is right up your alley", says lead developer Olli Alatalo.

No time to take a breath - Tesla Force is now available to download on the iOS App Store and on the Google Play Store for Android devices. You can find out more details about the game over on the official website, or join the community of followers on the game's official Facebook page. You can also take a sneak peek at the gameplay trailer embedded above to get a taste of the adrenaline-pumping action.

Are you on the hunt for more procedurally generated levels you can try to clear over and over again on your phone? Why not have a look at our list of the top 25 best roguelikes and roguelites for iPhone and iPad (iOS)?

Next Up :
Howloween Hero lets you play as a trick-or-treating doggo, coming to iOS on October 25th