Plus: going free, approaching Android, and the endless appeal of Evil Demon Monkeys

We chatted to Keith Shepherd and Natalia Luckyanova from developer Imangi about going free to play, approaching Android and what we can expect to see in the game's future.

Pocket Gamer: Temple Run was released as a paid app when it launched last summer. What was the impetus behind going free to play later that autumn?

Imangi: We designed Temple Run from the beginning to work as a free to play game with in-app purchases, but we were hedging our bets at launch. You can always go from 99c to free, but you can't really go from free to 99c.

We had an awesome launch as a paid game, going up to the number 50 Top Paid app with tons of great reviews from players and critics. However, it eventually started sliding back down the charts, like most games do.

That's when we decided to give free to play a try.

PG: Not long after that, the game suddenly became this huge phenomenon. What do you think have been the main reasons for Temple Run's massive success?

It's turned out to be a game that has amazing mass appeal and is a great fit for a mobile device.

But mostly, it's the Evil Demon Monkeys. People can't get enough of them.

PG: I think I found about about Temple Run on Twitter. Just how important is word of mouth? Are positive tweets more impactful than a high ranking on iTunes?

It's pretty hard to tease out what contributes most to sales, but we think the rise of Temple Run was all about word of mouth.

After we went free, we saw more and more tweets and Facebook posts about it.

People loved talking about their high scores and competing with their friends. We've also heard stories of whole schools or offices being addicted to the game, with everyone competing for the high score.

For some reason, the way people play Temple Run is extremely social. We think it's word of mouth that drove more downloads, which drove higher rankings. 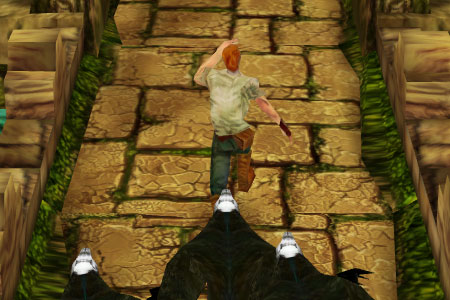 PG: Android is a very different beast from the iPhone. How did you approach Google's OS?

We've never done an Android game before, so it's a big experiment for us.

We realised we had to do a port when we started getting completely overwhelmed by requests from Android users who had played Temple Run on their friends' phones and wanted a copy for themselves.

We just tried to do a very faithful port of the original, and then we'll see if anything needs to be different after the launch.

PG: Will the Android edition get anything exclusive?

Imangi: Right now it's a direct port of the iOS version, but who knows what will happen in the future!

PG: What does the future hold for Temple Run in general? What can we expect to see in updates?

We're working on adding more objectives, characters, and power-ups. We're also working on an update for the new iPad, with high-resolution art.

Lots of people also want to see new environments, which is a much bigger deal because the whole game was skinned around the temple - the menus, fonts, end game cartoons, etc.

We're thinking about how to add different environments and make them work organically with the game and not look like something tacked on.

Imangi: Somewhat. We get a ton of ideas and suggestions from fans, but we mostly look for patterns and trends in what people want and like.

For example, people talk about the objectives a lot - which ones they achieved, which ones they're working on - so we know it's something people enjoy a lot.

We definitely like adding objectives, because it gives people a reason to keep playing.

Temple Run is available for free on Google Play, and the iPhone App Store. Read our review, and check out our tips for the game.
Next Up :
Figure Fantasy adds new figurines, limited in-game rewards and more in "A Certain Scientific Railgun T" collab

Temple Run gets its own boardgame

Imangi Studios: Temple Run clones are both 'flattering' and 'frustrating'

Temple Run blasts past 100 million downloads in a year