Seeing as Outfit7’s upcoming game Talking Tom Hero Dash is finally open for pre-registration, we figured now would be a good time to offer a little preview of what you can expect from the action-packed, superhero-themed endless runner.

The story revolves around the superhero team known as the Talking Tom Heroes. This powerful group is made up of the five awesome Talking Tom and Friends characters: Talking Tom, Talking Angela, Talking Ben, Talking Hank, and Talking Ginger. As with any legendary superhero team, every member has their own unique personality, cool powers, gadgets, and outfits. 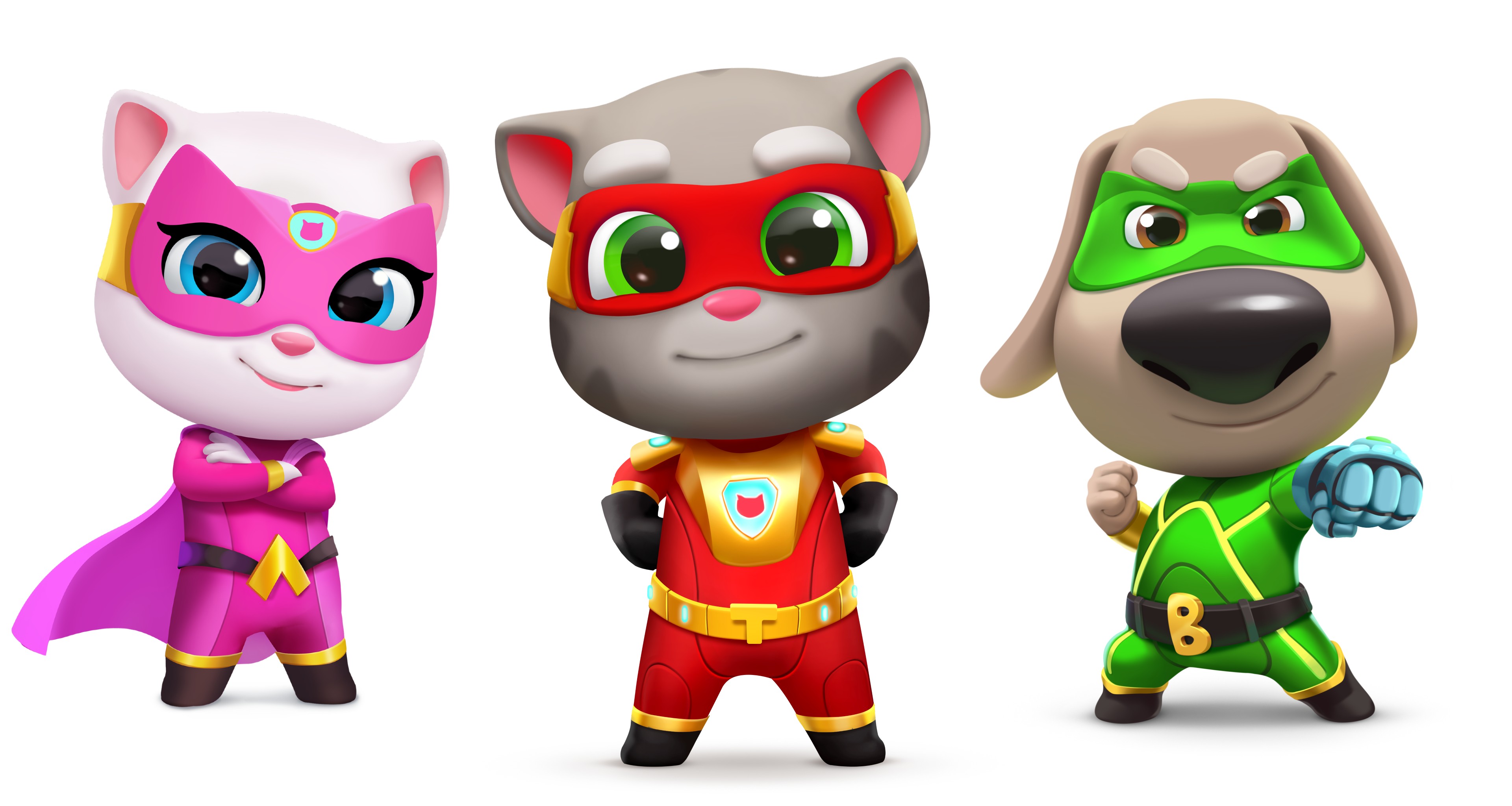 Tom, the leader and founder of Talking Tom Heroes, is best known for his bravery and commitment to always doing the right thing. In addition to his heroic nature, he also utilises an arm-enhancing special vest that makes him especially strong. Angela, the fastest member of the team, has stellar vision thanks to her high-tech rose glasses. She’s also incredibly agile and capable of rapidly traversing even the most treacherous terrain.

Then there’s Hank, the team comedian, whose bottomless backpack contains all manner of funny gizmos to be used against any evildoers. His last-minute plans to save the day are notoriously silly, and yet they always seem to work out in the end. Ben is by far the smartest member of the team, often using his tech know-how to conjure up amazing gadgets and ultimately help those in need. His magnetic glove comes in very handy when metal objects happen to block the team’s path.

Last, but by no means least, is Ginger. While he may be young and small in stature, his incredible stealth abilities and hoverboard skills make him an invaluable and courageous member of the team. He’s always ready and willing to help out and join in on even the toughest of missions. Together, Talking Tom Heroes aim to be the ultimate defenders of the planet.

That being said, their plan doesn’t quite work out as intended, as four members of the team get kidnapped by a pack of destructive raccoons. So it falls to Tom to seek out and rescue his friends, and then put an end to the chaos. The problem is that all his friends have been split up and hidden in different locations around the world.

The pesky raccoons have also been busy vandalizing some of the world’s most famous places, including cities styled like New York City and Beijing. By restoring each location to its former glory, Tom and his super friends will be able to lure out each level’s boss. Once the boss is defeated, you’ll save another friend and unlock a new playable superhero character.

The basic 3-lane endless runner gameplay sees you speedily traversing and exploring picturesque environments in search of collectible coins, loot, and enemy raccoons. The running itself is greatly enhanced by the inclusion of exciting superhero powers and gadgets, including the previously mentioned magnetic glove, hoverboard, and arm-enhancing vest.

Given that every member of the team has their own pros and cons, they all play slightly differently. Therefore, you’ll want to experiment with each one to find out who best suits your personal playstyle. There’s a ton of great stuff to see and do here, and you’ll frequently be unlocking cool new outfits as you go.

iOS and Android players can head over to the official Talking Tom Hero Dash website to pre-register now. Once the game hits 3 million pre-registered users, Tom’s special limited-edition Titanium Force outfit will be unlocked for all heroes to download for free from June 6-20, 2019. To find out more about the thrilling adventures of Talking Tom Heroes, you can check out Outfit7’s brand new animated series of the same name over on YouTube.

What's A Preferred Partner Feature?
From time to time Steel Media offers companies and organisations the opportunity to partner with us on specially commissioned articles on subjects we think are of interest to our readers. For more information about how we work with commercial partners, please read our Sponsorship Editorial Independence Policy.
If you're interested in becoming a Preferred Partner please click here.
Next Up :
Boom Beach Frontlines release date and the rest you need to know