Celebrating the spookiest season in style

Outfit7 has announced that several of its most popular Talking Tom and Friends games will receive Halloween updates which add a host of spooktacular content. For a limited time only, fans can get into the Halloween spirit by exploring the latest tricks and treats to come to Talking Tom Hero Dash, Talking Tom Gold Run, My Talking Tom 2, and My Talking Angela.

First up, Talking Tom Hero Dash's villainous racoons have donned spooky jack-o'-lanterns to scare Tom and his superpowered friends silly. Together, they'll have to be extra brave and work to take on the pumpkin-headed racoon menace. To help you on your quest, you'll now have access to a new JetBike gadget. This latest content drop will be available on Thursday, October 24th. 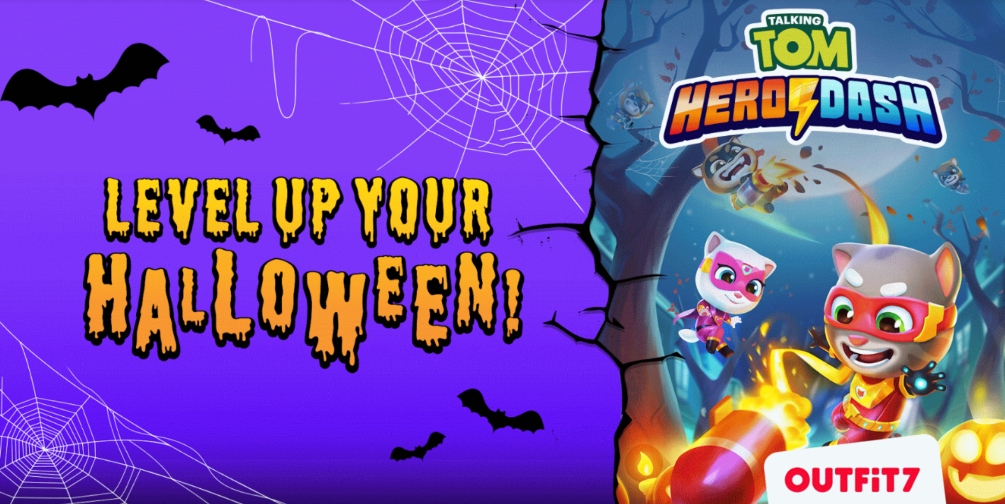 Talking Tom Gold Run's limited-time Halloween world will soon open to all intrepid explorers. On top of the main world, there are also three side-worlds to work your way through. Here, you'll find collectable pumpkin tokens which can be traded for neat Halloween treats. The update also adds a fun 'Mummy Tom' skin to help you celebrate the spookiest season in style. This'll all be available on October 25th.

Over on My Talking Angela, new Halloween costumes and scrumptious treats are available right now. You'll also find a spooky porch reskin, photo filter, and dance stage have been added.

My Talking Tom 2's latest update, set to arrive on October 24th, adds some sweet Halloween décor and five puppet voices for Tom to test out. You'll also have the chance to delve into the Carnival Seasonal World and participate in some special events.

If you're a fan of the Talking Tom and Friends games and animated shows, you'd be wise to check out our extended news piece about everything developer Outfit7 currently has in the works, including two new games, a new character – Talking Becca – and even a feature film. You can also check out a brief history of Outfit7 right here.

Check out our news section to discover the latest, and greatest, games.
Next Up :
Bleach: Brave Souls adds in-game campaigns and free summons as a tie-in to Thousand-Year Blood War