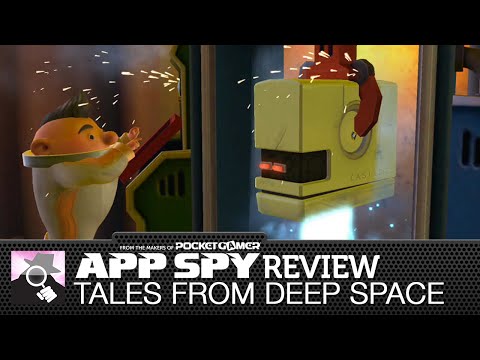 Tales From Deep Space is another game from Amazon. And it's probably the best yet. It's more focused then Lost Within, and less muddled than Til Morning's Light, and it's not afraid to play around with its ideas.

It's not perfect, and sometimes the controls will frustrate you, but this is an interesting, puzzling adventure game with a cheeky sense of humour, and enough going for it that you'll happily stick with it until the end.

The game sees you playing a drone and an astronaut stuck on a space station. You can switch control between the two of them, and need to use their unique skills to solve a variety of puzzles and challenges.

There are simple combat sections as well, but they get more complex and interesting as you play. Where first you're firing wildly, after a while you need to figure out ways past guards, and how to expose their weak points.

You control the game by sliding a finger around. There are simple platforming sections, and sometimes the controls will let you down here. Tapping fires your gun or swings your fists, and buttons appear on screen when you're near an object you can interact with.

You can play the game with a friend if you'd prefer, each of you taking control of either E or CASI. It doesn't change the way things play, and you'll each need a device with the game installed on it for it to work.

It all gels together pretty darn well, and while you can play everything in a single, reasonably long sitting, it's cut up into decent-sized mobile slices as well.

Amazon has made a few missteps with its game output, but Tales From Deep Space is an impressive effort. It's not quite a must-buy, but it's going to appease fans of simple, engaging adventure games.

This is a polished, highly entertaining mobile adventure. It might not be perfect, but you'll have a smile on your face for most of your playthrough. And that's no bad thing.

The first really good game from Amazon, Tales From Deep Space is an entertaining adventure
Next Up :
Star Discord review - "Needs polish, but it's shaping up to be a true RTS on the go"