Blast from the past

Konami is making a new Bomberman game that celebrates it having been 30 years since the original was released on the NES.

Famitsu reports that it's called Taisen! Bomberman ("Taisen" being the Japanese word for competition) and will be coming to iOS and Android.

There will be a solo play mode with 100 levels to beat. Each of these will have leaderboards for highest score and fastest times so you can get competitive.

However, these only serve as training for the game's multiplayer modes. That's where the real competition is at.

Each online match will have up to four players competing to blow up objects and each other in top-down mazes. 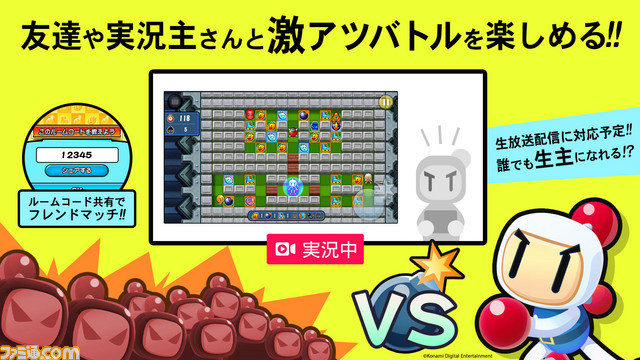 The game will have cross-play capabilities so you can play with people on both iOS and Android no matter what platform you're on.

It'll also have matchmaking so you always go up against people of your skill. Plus, you'll be able to private matches with friends by entering their game key.

No word of when Taisen! Bomberman has been given yet. Nor has there been any mention of it being released outside of Japan, but it seems likely.