Sure, there was quite a bit of running at the enemy in the Olden Days - that’s just a by-product of using weapons that require being close enough to smell your enemies’ armpits - but battlefields were still large, three-dimensional affairs, with flanks and opportunities for a wily commander to exploit.

So the two-dimensional warzones of Swords and Soldiers don’t exactly promise much in the way of strategy. Yet even the most hardcore of armchair generals will likely be won over by the game’s approachable and engaging riff on the castle vs castle sub-genre.

However, it’s likely your reaction when first starting up the game will be 'is that it?'.

Viewed from the side, Swords and Soldiers is at its core a game about getting your troops from the left side of the screen over to the right.

This is achieved by creating various units that trundle along automatically, killing/dying as they meet the enemy coming the other way.

Building said troops requires gold, so employing a few civilians to help mine the good stuff is a solid plan. So is spending said gold on researching newer, more focused troop types - each with their own strengths, weaknesses, and speed on the battlefield.

That’s not to mention spells that can swing the battle in your favour, towers to buy time for counter-attacks, or unique godly units that can wipe out whole regiments.

As these concepts are slowly introduced across the first of three campaigns, it soon becomes apparent that there’s more to Swords and Soldiers than first meets the eye.

Each of the three factions - Vikings, Aztecs, and Chinese - has its own unique band of troops, spells, and skills that have to be fully utilised to win a battle.

The barbecue-loving Vikings are the most normal of the bunch, with hard-hitting melee units and disabling spells.

On the other hand, the Aztecs favour damage-over-time poison attacks, and can utilise the services of the undead, while the Chinese have strangely cute (and deadly) teleporting monkeys.

The humour and presentation of the game in general is top-drawer.

Beserkers bashing apart huge golems or firing firecrackers into groups of skeletons is smoothly animated and packed with character, while other neat touches like the day-and-night cycle and persistent bodies of the fallen just add to the overall polish.

Striking a balance between casting direct/support spells and building troops is handled via a simple, always-present row of buttons at the top.

With most of the nitty-gritty micro-management taken care of, it means your concentration is entirely focused on breaking the enemy lines.

The Campaign is about three to four hours long and manages to mix up the simple gameplay well, with some missions limiting troop types while others introduce multiple routes (up or down).

If you’re looking at which version to buy, then we highly recommend the iPad version over its smaller cousin, thanks to the ability to play two-player games on one machine (split-screen).

The lack of any online functionality in either version is, however, a disappointment, given how competitive these one-on-one matches tend to be.

Regardless of the missing multiplayer, though, Swords and Soldiers manages to break through the initially guarded impressions and produce a riveting and approachable strategy game. 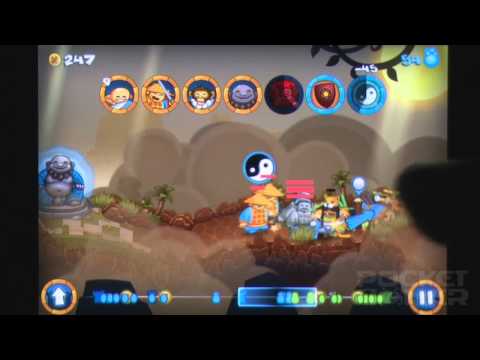 A fun and easy to play strategy game that entertains with its great graphics and wide variety of troops and missions
Next Up :
Netflix Oxenfree review - "Reading the signals of a thriller story"