Swipe Manager: Soccer 2018 is a bit like the current Manchester United team.

Take a look at its constituent parts on paper, and it should be brilliant. I mean, a game that combines the intuitive card-swiping decision mechanic of the brilliant Reigns series with the world's most popular sport is a surefire winner if ever I saw one.

And yet there's something fundamentally amiss here, resulting in an unbalanced and ultimately unsatisfying game.

So yes, the core premise of Swipe Manager: Soccer 2018 is pure Reigns. You're presented with a developing scenario, and you must make an often binary decision by swiping the current story card to the left or right.

Rather than taking on the role of a monarch in a fantasy realm, you're here taking the role of a football team manager. You'll need to deal with the press, fans, team members and the board. 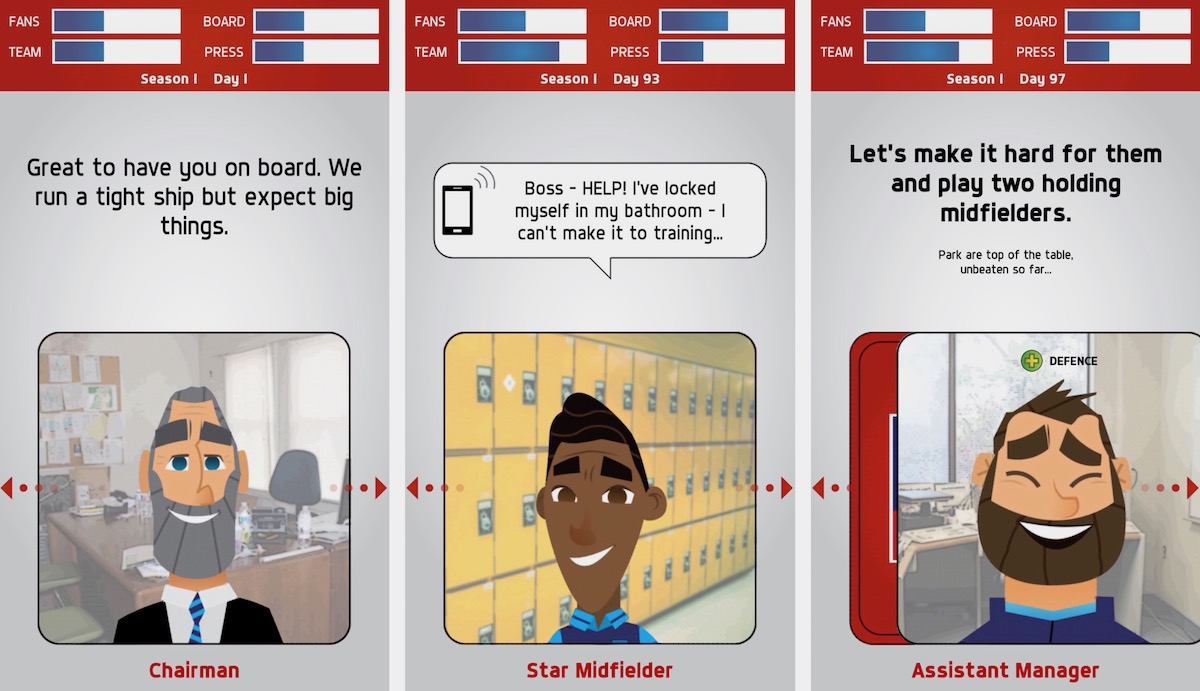 Indeed, those four parties are each represented by an RPG-like gauge, and each decision will affect them in some way. You don't know exactly how these stats are going to be modified, but you can get a preview as to which of the stats will be altered by pausing half way to either side.

Essentially, the game is all about maintaining a sense of equilibrium. You don't want any one of these bars to completely empty, as it'll result in you getting the sack.

In theory this sounds like a great way to create a super-casual footy management experience. But it simply doesn't work out like that.

Put simply, the whole football manager world doesn't lend itself to this way of doing things. Attending a press conference simply doesn't provide the same level of narrative interest as, say, the offer of supernatural assistance from a witch, or the threat of holy war from a put-upon church.

The swipe system itself proves ill-fitting when it comes to match day. Setting your team's tactical approach for an entire match through four binary yet vaguely defined decisions feels like a total lottery, and you're simply not invested in the outcome as a result.

While the game is reasonably well presented, with nicely cartoony graphics and a light sense of humour, the stream of anonymous talking heads gets tired pretty quickly.

It's also annoying when an ad crops up after every single match day. Oh, and the lack of iPhone X support is mystifying almost a year into the phone's life.

Swipe Manager: Soccer 2018 gives quite the sales pitch, then, but ultimately it lacks the tactical depth and narrative intrigue to do the job properly.

The premise of mixing Reigns with Football Manager is a neat one, but in practice Swipe Manager: Soccer 2018 feels way too shallow and uninvolving
Next Up :
Otaku's Adventure mobile review - "A truly bizarre love triangle"