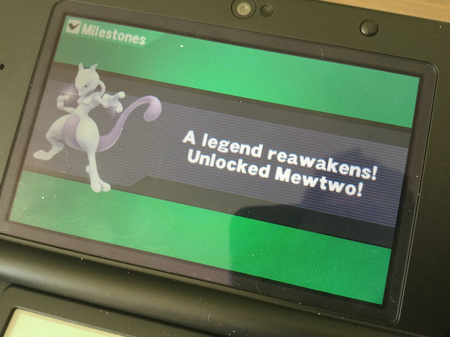 After months of waiting, the psychic Pokemon Mewtwo is now available as playable character in Super Smash Bros - but only to those who entered a special promotion.

Gamers who purchased both the 3DS and Wii U copies of the fighter were encouraged to register the games on Club Nintendo. If you did that before March 31st, you should now have a code to unlock Mewtwo in your inbox.

But let's say you've got a code in your inbox and you want to redeem it. Well, first things first, you'll need to update your game. You can find the update data on the eShop by searching for Smash Bros.

Alternatively you can load up Super Smash Bros and attempt to play an online match. This will connect you to the Nintendo Network, let you know that your game needs to be updated, and then quickly start downloading the update.

Then you can press the Y button on the main menu to access notices and the add-on shop. Hit Y again to load the store. From here, simply hit enter download code and plop in your Mewtwo digits.

You'll now unlock Mewtwo as a fighter in the game. It also comes with two trophies - one for Classic mode and another for All-Star.