And it's looking good

Following the Nintendo Spotlight, and a heck of a lot of announcements, we're going to get a better look at Super Mario Odyssey at Treehouse Live and it looks pretty great. 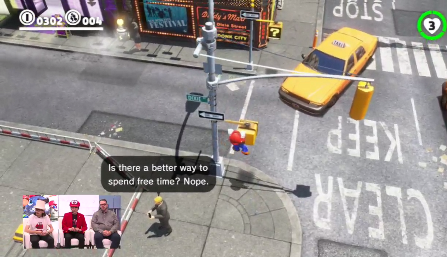 From the interview with Yoshiaki Koizumi and Kenta Motokura, the theme of 'going on a journey' is a core part to Super Mario Odyssey, but there's still that element of surprise hiding between the layers (hence the T-Rex). However, the surprise was also balanced with an emotional familiarity that's cute from the Mario series.

Motokura explains that the overall story of the game is that you take over different enemies/object by throwing your hat and taking over whatever being it lands on. The city itself is inspired by certain Donkey Kong elements, but more information will be revealed in time.

From the gameplay, things are looking pretty tidy. You don't take fall damage even if you jump from the tallest building (so long as you've got something to fall onto), you can wall-jump, swing from bars, climb various surfaces, and more. You've got three hearts, but dying in-game doesn't amount in much punishment as you'll only lose ten coins.

Mario can also throw Cappy - his hat - by using the Joy-Con's motion controls which is a really neat effect. In terms of coins, there are two types. The purple triangle sorts can be found in the Desert Kingdom and can only be used here. The yellow coins can only be used in New Donk City.

One of the coolest features is the pipe transitions which then change Mario from a 3D figure into a 2D figure who can still work his way around a 3D environment. It's a very nice touch.

There's a lot that can be said about Super Mario Odyssey, but I'll include a link to the video once it's available so you guys can see if for yourself. It'll be coming out on October 27th 2017. 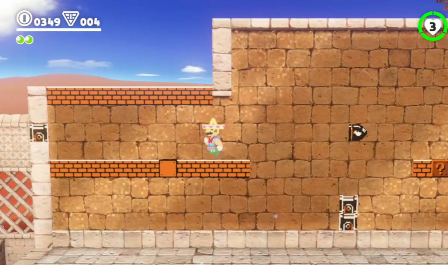