They all occur during your typical game of Super Hexagon, but somehow it manages to be really rather fun all the same.

Put a hex on you

Super Hexagon is from Terry Cavanagh, the creator of fiendish retro platformer VVVVVV, so we were prepared for a tough ride (as well as artfully minimalistic graphics) as we waited for Super Hexagon to download.

But nothing can quite prepare you for just how toe-crushingly tough Super Hexagon actually is.

After a couple of dozen tries I was finally able to hit level two. If that doesn't sound pathetic enough, getting to level two involves surviving for 20 seconds.

Indeed, survival is what Super Hexagon is about in its entirety. You control a little craft that's stuck in orbit around a hexagonal sun, and the only buttons you have to worry about are virtual clockwise and anti-clockwise inputs.

As soon as the level starts you'll be bombarded by intricate patterns of barriers all being sucked towards the hexagon. Needless to say you don't want to get caught in-between.

Weaving between these solid barriers is complicated by a couple of things - the sheer speed at which everything happens, the level's disconcerting habit of lurching and spinning this way and that, and some slightly twitchy controls.

The first two are fair enough in a game of this sort. As with WipEout, You need to be really wired into the game to get anywhere - this is no idle time waster, in spite of its simplicity.

This ethos is underlined by the stripped back retro visuals and pounding techno soundtrack, which ties in closely with the swirling, pulsing levels. Get in sync with these beats and you'll definitely improve your chances.

Unfortunately, those skittish controls can't be ignored in such a straightforward game. You'll die far too many times through rotating too far or not far enough - and there's the continual suspicion that the lack of precise digital feedback is as much to blame as your own cack-handedness.

Super Hexagon undoubtedly engenders that bloody-minded 'just one more go' mentality, though, and you over time you get better at manipulating those delicate controls. After all, cursing and blaming everything apart from your own limited skill is all part of the appeal. 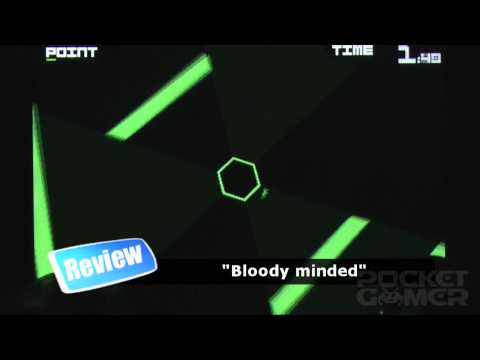 Tough, frustrating, and a little too twitchy, Super Hexagon is nonetheless a skilfully constructed and compelling game / instrument of torture
Next Up :
Pawnbarian review - "A minimalist roguelike that's hard to put down'"