It's called Super Cane Magic ZERO, which is a title that might give you an idea of the level of magical buffoonery you can expect from the game.

It's about a guy (or a kid?) called Coso who is so naive that he'll believe anything so hard that it becomes true.

If he believes that he can walk on lava, then he can. If he's feeling weak, he can believe that he has a second heart, and then he has one. Pretty neat if you ask me.

The plot here starts with a Wizard Cake that dies from sneezing. Then, the Wizard's dog gets hold of his magical cane and starts to screw up the world. 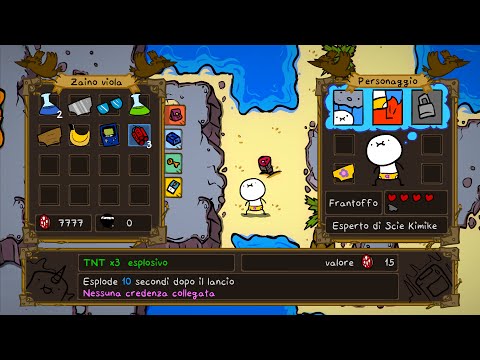 Rivers turn into steaks (which makes me very hungry), grass turns into lava, and the internet gets slow and shoddy, apparently. Chaos ensues.

You, as Coso, set out to put things straight with his ability. This involves traipsing across seven areas filled with monsters, puzzles, characters, secrets, and treasures.

Oh, and in the game you interact with pretty much everything by throwing it. You throw keys into doors to unlock them, and chuck elderly people at monsters if you're feeling mean.

Super Cane Magic ZERO has been successfully funded on crowdfunding site Eppela. This means it'll be heading to PC, iOS, Android, and Windows Phone in 2015.

But it's not over yet. There are stretch goals in place for a Vita version which we quite fancy. So throw your money at it or don't - it's up to you.

You can find out more about the game on its Steam Greenlight page.