There are certain members of society who enjoy nothing more than hurling themselves off high buildings and unfurling a parachute at the last possible minute to avoid a severe talking to by professor concrete.

These people are often dismissed as adrenaline junkies or lunatics, but have you ever considered the planning that must go into such death-defying stunts?

You play the titular stickman, controlling his movements with a series of taps. The first tap backs you away from the edge of the building you're standing on. The farther back you go, the farther you'll jump.

Once you think you've gone far enough, tap again and your little death-defier will start to sprint forward. When you've reached the edge, or anywhere else you want to start your leap from, another tap will hurl you into the air.

A final tap releases your parachute, letting you sail serenely to the ground. Unfortunately, though, there's a time limit, so if you spend too much time dawdling with air resistance you're going to have to start all over again.

Levels start off reasonably straightforward, but it doesn't take long for skyscrapers, cranes, blimps, and heavy winds to turn up and try to smash your brittle stickman bones into fine, adrenaline-soaked dust.

While the game is entertaining enough, it fails to really capture the thrill of falling at great speed. Snapping out your parachute seconds before death should be a heart-pounding experience, but here it feels a bit sedate, like part of a sensible and well thought-out plan.

There are some tempestuous difficulty spikes as well, with some levels requiring almost pixel-perfect execution to complete. It makes for a frustrating experience, albeit one tempered with occasional bouts of enjoyment.

There's nothing fundamentally wrong with Stickman Base Jumper. It's just a little workmanlike for a game about jumping off buildings. It's fun, but in a planning conference way rather than an extreme sports way. 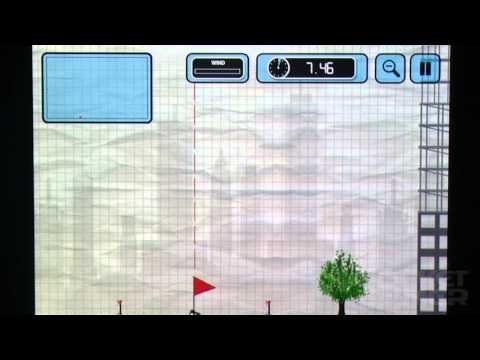 Reasonably entertaining and well-constructed, Stickman Base Jumper never manages to make you feel like you're doing something dangerous
Next Up :
Netflix Oxenfree review - "Reading the signals of a thriller story"