Instantly, you know whether you'll like this game or not depending on whether you like its parent show, South Park. Known for its crude humour, it certainly doesn't pull its punches on Nintendo's newest family console.

While some gamers won't be too thrilled about its gruff, and at times offensive, humour, The Fractured But Whole is a surprisingly fun game that's extremely easy to lose yourself in. Children, look away now.

The Fractured But Whole is a turn-based RPG which follows on from its predecessor, The Stick of Truth. Kicking out straight in the previous game's medieval world, you trade in your sword and crown for a pair of skin-tight leggings and some snappy superpowers.

You may approach the subject with a sigh, but the game's strong superhero theme runs along as more of a parody than anything. Your kid gets to choose their first class, gets a tragic back story, and is set loose on South Park to fight crime and, er, stuff. 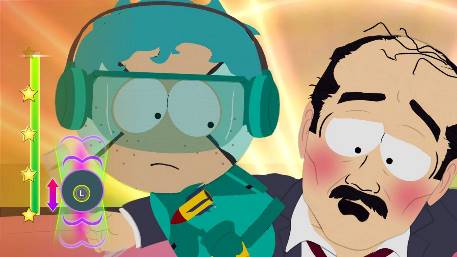 It may not be a particularly deep RPG system, but it's still a lot of fun. You'll search for missing cats, beat up bad guys, do good deeds, poop in everyone's toilets, and much more. You have about 20-ish hours of gameplay to get into or more if you go after all of the collectibles.

Since this is South Park we're talking about, especially with Trey Parker and Matt Stone still firmly behind the wheel, its references to gender, race, and a rather stereotypically brutal police force are clear as day and don't pull any punches.

Its excellent audio and visuals make you feel like you're watching the TV series and it's hard not to laugh out loud at times. I know I did. Alright, those of you that are easily offended and don't take kind to shock factor probably won't get on with this, but it's not for everyone.

The RPG mechanics aren't as deep as they could have been, but for those newer to the genre this is a pretty good introduction. If you get the drop on your enemies before going into battle, you get to move first. You also get the chance to alter your team to balance player strengths and manage any weaknesses. 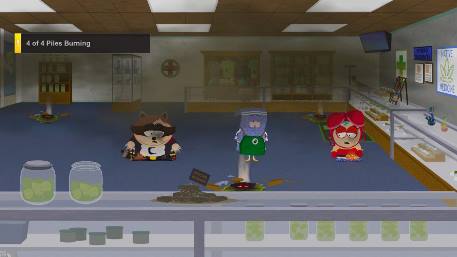 After that it's all strategy. Your attacks have different tile lengths and patterns, and you have to consider where each move will get you as well as how to take your enemies down. Whether you're chasing a stripper down a hallway or getting your opponent high as a kite, there are plenty of things to consider when fighting.

To help you along the way you've got tons of items to collect, a big crafting system, costumes that you can frequently change up, a character sheet, and more. It's a bit overwhelming at first, but you quickly learn what to keep an eye on.

As you progress through the game you'll unlock new abilities and gain allies to help you reach more difficult places on the map. Plus, alongside the main storyline, you've got a bunch of other quests to take part it to gain more loot, valuable items, and popularity.

One area the game falls a little bit flat in is Coonstagram, South Park's primary social media platform. You can to take selfies with people to gain followers and can read the hilarious messages that crop up, but it's easy to lose interest in it after a while.

There were also several audio and graphical glitches that messed with the gameplay. Thankfully they weren't too common, but at one point I did have to restart the game after it got stuck in a loop. 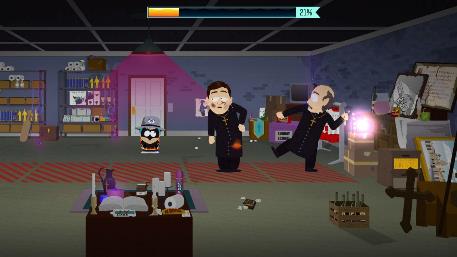 The Fractured But Whole is a brilliantly funny and entertaining RPG perfect for players who love strategy and love South Park. While the more hard-core folks out there may not find much challenge in its combat, its humour is enough to keep you playing on.

Be warned that if you're sensitive to extreme language or anything I've mentioned above you might want to do some research before grabbing this game. Sometimes it's utterly bananas how far past the line the game goes, but it's equal parts shocking and utter belly-shaking funny.

The Fractured But Whole is an unexpectedly fun casual RPG that's really easy to pick up and play
Next Up :
Hero Emblems II review - "Lovely visuals and music, but match-3 combat lacks strategic depth"