The latest contender to the iPhone platformer crown is Soosiz. Well received by the gaming community so far, Touch Foo’s latest attempt at the classic 2D platformer is turning heads for more than a couple of reasons.

At first glance, you'd be forgiven for overlooking Soosiz as just another Mario clone. And, for the most part, Soosiz is just that.

The gameplay involves running around and jumping over 65 different levels (complete with mushrooms), avoiding enemies (who are killed by jumping on their heads), collecting coins and rescuing your friends. You even have the ability to - for a limited time - become invincible as you plough through the enemies that threaten the Mushroom Kingdom. I mean world.

Not that there’s anything particularly wrong with all of this. Wasn’t it Rolando who said "If it ain’t broke, don’t fix it"?

However, Soosiz’s real selling point is the ever changing gravitational focus of each individual platform. This innovation has been thoroughly integrated into the gameplay, adding a unique twist to an otherwise saturated genre.

Jump to a platform hovering above your head and the screen flips upside down; traverse a circular platform and the screen rotates at the same speed ensuring your little pixilated feet remain firmly on the ground.

Priced at £1.79 (or $2.99) Soosiz looks to have all the tools necessary to take a shot at Rolando’s iPhone platforming crown.

Expect a review sooner rather than later. In the meantime have a gander at this rather dashing trailer. 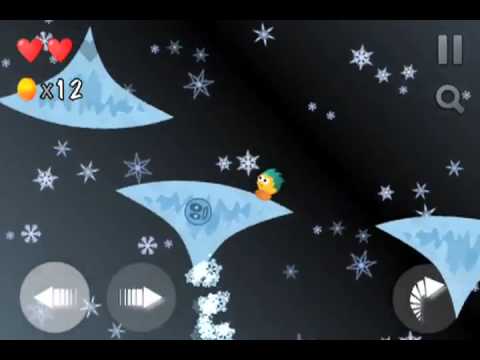