Personality is a great thing to have, but it's not always essential.

Coldplay has been a chart success not because its music is interesting or exciting but because... actually, I'm not sure where I'm going with that example.

Does a game need a personality? I thought so, until I played Snail Bob. This is a game with a bland art-style, a forgettable universe, and a hodgepodge approach to gameplay with no real identity.

And yet each of its elements has been engineered with a high level of skill and precision, making it a pleasure to play.

You play the part of a snail. A snail called Bob. That's pretty much all you need to know about the story.

What's important is that you guide Bob through each level by interacting with a wide variety of objects, gadgets, and creatures in time-honoured Rube Goldberg fashion.

We've seen dozens of casual physics games like this before, of course, and plenty of them are better presented or present more original twists on the formula. But few are as tightly designed or nicely varied.

One minute you're working a magnet and a makeshift seesaw to get you to the level exit, and the next you're parachuting from the top of the screen and squeezing balloons to help blow you clear of danger, or unleashing a genie and making a wish to help get past an Egyptian sentinel.

Added to this is the persistent secondary goal of having to find the three stars hidden around each level. These can be concealed behind level furniture, expertly camouflaged, or hidden in plain site. As obligatory three-star systems go, they're a lot more fun to acquire than simply executing each level to perfection.

It's just a shame that Snail Bob is so unassuming in every other respect. Its universe is so painfully by-the-numbers it almost hurts. Its comic book cut-scenes are so lacking in character, purpose, and artistry that they're actually quite hard to digest.

To call the art-style ugly is wrong. It's too bland for that. Suffice to say the lead character resembles the kind of thing you'd see doodled on the folder of a moderately talented GCSE Art student.

While this lack of personality would spell the end of many an inferior game, Snail Bob deserves a chance if you've exhausted the prettier, bolder examples of the genre (like Wimp). Far more attention has been paid to its mechanics than its personality, but we're surprisingly fine with that. 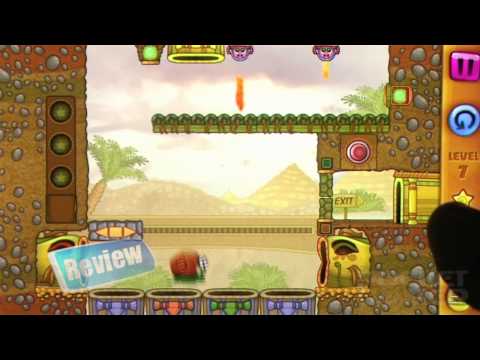 Snail Bob won't get your heart racing with its originality, art style, or presentation, but it is a very well-designed physics-puzzler
Next Up :
PUBG New State review - "Not-so-new state, but still enjoyable nonetheless"