Slayaway Camp isn't a new game having released on Steam in 2016, and on iOS and Android last year. However, since a shinier version is on its way to the Switch it's time to start sharpening your butcher knives, slashers. 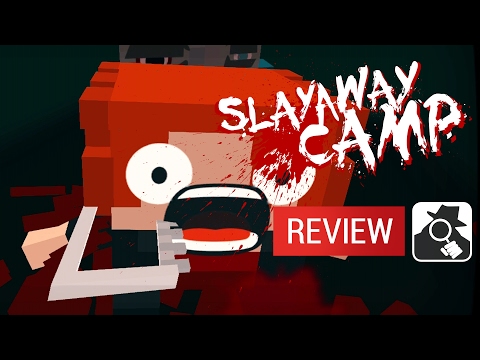 Alright, that sounded a bit morbid, but in an 80s slasher movie-like game about terrorising camps, killing kids, cops, and workers there's not really a light side. Well, aside from the fact it's truly excellent fun.

Slayaway Camp is an isometric puzzler with over 200 levels, grizzly cutscenes a'plenty, multiple killers to unlock, and more as you take up arms as Skullface and slip and slide your way through victim after victim.

Of course, it wouldn't be much of a Butcher's Cut if it didn't have a few extra little bits and bobs, so aside from the base game you'll also get access to the Deluxe Edition, My Gory Valentine, Hell Camp, Monthly Murderers Series 1 and 2, Supernatural Forces, and Santa's Slay. Plus, more puzzles, more gore, more killers, and just... more.

We don't know when Butcher's Cut will be arriving on the Switch, but we'll keep you updated once we know more.