Wildlife Studios’ free-to-play aerial combat game Sky Warriors is launching for iOS and Android next month. It transforms players into fighter pilots who fly planes from the modern age against others in multiplayer battles.

The studio has gone all out developing this game, creating it after taking input from real-life fighter pilots to create an extremely authentic airbourne experience. It’s not just about getting into a dogfight with every jet you see. Sky Warriors makes you think, manoeuvre your plan so you can trick and defeat your opponent.

Sky Warrior’s multiplayer battles will pit players from around the world against each other. Coordination is of utmost importance here. Squads must cooperate if they wish to get high scores and win games.

The game’s gyroscopic controls give players the ability to fly their plane however they want. They can manually control the speed, pitch and roll of the plane. This, coupled with high-resolution graphics, will provide a nearly lifelike experience. For phones that support it, Sky Warriors can run at up to 120 frames per second. The game also features variable lighting and the option to change the island to day, night, or dawn. 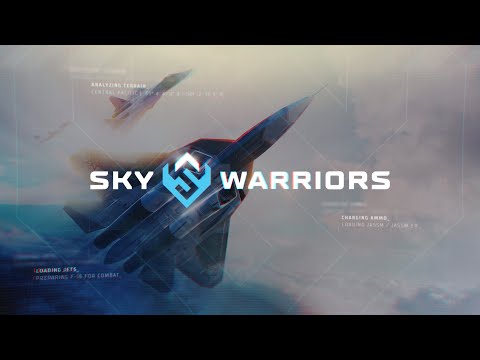 Of course, the most important part of any fighter jet is the weapons. The right side of the pilot’s screen features the current arsenal. As you progress through the game, new weapons will slowly unlock, with more customisation options becoming available for the existing choices.

Besides having a menacing weapon array, you’ll want to build a fleet of your favourite jets as well. Progressing through the game and scoring high will reward you with new planes to pilot. Additionally, a few exclusive aircrafts will also be available via in-app purchases. The planes can also be customised by adding unique flares.

Sky Warriors launches globally for free on October 6th. It can currently be pre-ordered on the App Store and Google Play.

Looking for an adrenaline rush? Check out the top action games to play on mobile!
Next Up :
Pokémon GO October 2021: New legendaries, a Halloween event and much more