Out at midnight: Re-write history and dominate the skies in Sky Gamblers: Cold War for iOS

At midnight this evening, California-based developer Atypical Games will release the next instalment in its award-winning Sky Gamblers franchise on the App Store.

In Sky Gamblers: Cold War, you'll - once again - take to the skies in a variety of different aircraft, and complete missions that involve covert operations and blowing stuff to smithereens.

Once you've aced all the missions, you can jump into one of the game's multiplayer modes and compete against other pilots from around the world.

There are multiple multiplayer game modes to keep you busy, including Survival, Team Deathmatch, Capture the Flag, and Defend the Base. 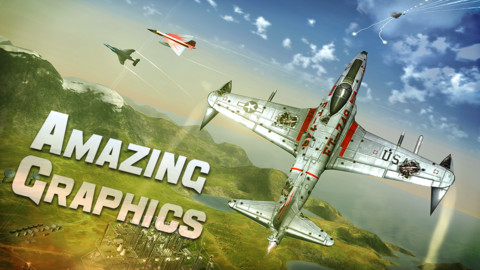 As mentioned earlier, Atypical's air-based iOS combat titles are well regarded around these parts, so we have high hopes for Sky Gamblers: Cold War.

You'll be able to grab this latest instalment of the Sky Gamblers franchise (which features support for AirPlay, iCloud, and Game Center) from the App Store at midnight this evening for £3.99 / $5.99.

IGN's Free Game of the Month is the Silver Award-winning Sky Gamblers: Cold War on iOS