The new roguelite dungeon crawler from 10tons is out now - Skeletal Avenger lets you hack and slash your way through unholy foes for iOS users everywhere. Players will step into the shoes of a wronged skeleton who's willing to do anything just to avenge his own death - even decapitating himself.

Skeletal Avenger features over fifty perks and what-have-yous that will make each new run different from the last. Special attacks are unleashed through "head-chucking" moves as determined by your hat, while the procedurally generated levels throw more than a dozen unique enemies at you.

Varied perks are the game's jam - for instance, you can pick an Infernal Shield to gain invulnerability for two seconds after taking a hit (with a cooldown of ten seconds). Meanwhile, the Springy Knees perk lets you gain some extra dash recharge speed at 30%, and the Flaming Weapons perk buffs your primary attack with +10 Fire damage. 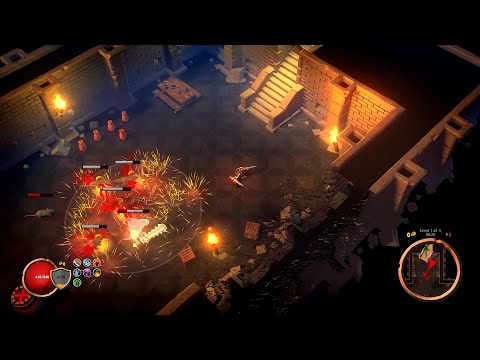 The four biomes - Dungeons, Sewers, Dark Caverns, and the Sorcerer's Castle - will test your skills throughout the main game mode, and the NG+ mode offers endless quests for you to complete when you're itching for more head-throwing action. The Arena Challenges, on the other hand, will put your avenging abilities to the test as well.

If you're eager to give the game a go, Skeletal Avenger is available to download on the iOS App Store for $5.99 or your local equivalent. You can also take a sneak peek at the release trailer embedded above to get a feel of the title's gameplay, and to check out the titular skeleton's self-decapitating techniques.

Are you on the hunt for more randomly generated levels you can try over and over again on your mobile device? Why not take a gander at our list of the top 25 best roguelikes and roguelites for iPhone and iPad (iOS)?

Next Up :
Solve Puzzles to restore Emma's Restaurant in Tasty Makeover: Match 3 Game, out now in Russia on Android and iOS