We all know that games based on TV and film licences are generally rubbish. What's less commonly acknowledged is that interesting-looking indie games with artsy graphics and offbeat themes are often rubbish, too. Developers bank on people judging games by their coverart.

It wouldn't be entirely fair to dismiss Sir Benfro's Brilliant Balloon as an example of style over substance, but there's no doubt that it does much better in the style category than in the substance one.

Let's start with the style. Sir Benfro's Brilliant Balloon is a beautiful-looking game. There's a bit of Where the Wild Things Are in the intricate cross-hatched sprites and backgrounds; a bit of '70s children's TV in the design of Mr Benfro himself; and a lot of Terry Gilliam in the general design, with a sprinkling of Wes Anderson.

The quirky design extends to the menus, where you can find a spotter's guide describing in great detail the game's unusual fauna, including the fish-like Eggbut Snaffle, the pufferfish-like Brackle McSturdy, and the squid-like Timorous Fizzle.

You can also read about naturalist and explorer Sir Benfro himself. Apparently, goes the blurb, "if he hadn't written a paper on it we would never have realised that the belvedere pantry fashioned its footwear from dozens of baby stingomps glued together with their own toe cheese."

That tells you all you need to know about the game's general aesthetic.

The gameplay - i.e. the substance - involves guiding Sir Benfro through four different cave worlds by making sure there are plenty of firefly-like Light Emitting Daves in his brilliant balloon.

These energy-supplying Daves are arranged in arcs and lines throughout the caves. Although the cave networks contain vertical, horizontal, and bumpy stretches, you don't need to worry about your direction of travel - you just need to time your screen-presses so as to avoid obstacles and collect Daves.

The core gameplay mechanic is a lot like Whale Trail's, in that holding a finger down on the screen makes you rise and letting go makes you sink, and in that you have to use this method to collect the means of your propulsion.

The difference is that in Sir Benfro's Brilliant Balloon there's nothing else - no power-ups, no extra gameplay modes, no leaderboards, and nothing to shoot for beyond privately completing the levels.

The comparison with Whale Trail is illustrative but not entirely fair. Even at the level of the core gameplay mechanic Sir Benfro's Brilliant Balloon is a subtly different, more conventional kind of game.

As you make your way through the more difficult areas you need to master a tap-to-brake control mechanic to avoid colliding with enemies, which makes for slower and more deliberate gameplay. Completing the final cave is like finishing a wire loop game on a bouncy castle.

The gameplay is tight, but it's also fairly shallow and unadorned. Once you become sufficiently competent you can thread your way through the whole game in about ten minutes, and without leaderboards to compete on or even your own high score to beat, it doesn't give you much of a reason to come back for more.

Yes, it's beautiful, but that's not what most of us play games for. 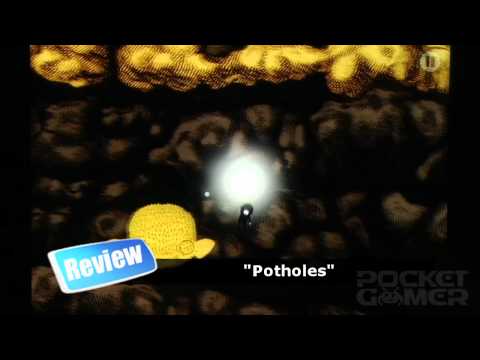 Sir Benfro's Brilliant Balloon is a good-looking and solid game, but it doesn't do as well in gameplay terms as it does in aesthetic ones
Next Up :
UFO99 review - "A fun little arcade game on the go"