Freemium endless-runner out now on Android

Boston-based indies Demiurge Studios and Owlchemy Labs have reworked and rebooted the PC and XBLA side-scroller Shoot Many Robots as a free-to-play endless gunner for Android.

The game stars P. Walter Tugnut, a gun-toting last man standing figure during the robot apocalypse. He'll have to tear down evil automatons, while leaping between lanes and avoiding obstacles.

Obviously, you'll pick up some cash along the way - represented by nuts - which you can spend on better weapons (flamethrowers, rocket launchers, freeze rays) and lots of silly hats.

Demiurge is the creator of the Shoot Many Robots console game, and a contractor that helped on Borderlands and BioShock. Owlchemy Labs, meanwhile, built Smuggle Truck and Jack Lumber, and helped port AAAAA! to mobile. 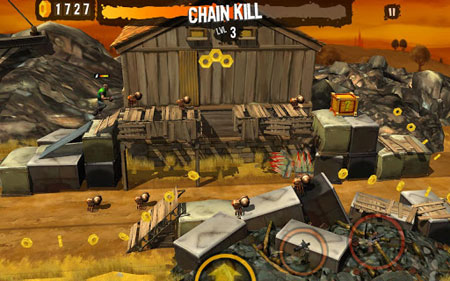 Shoot Many Robots is available for Android right now [download], and will materialise on iOS soon.