Scrap Divers, a brand new game from the creators of Retro Highway, launches later this month

Gearhead Games have announced that their second game as a developer, Scrap Divers, is set to launch on September 14th. After the launch of Retro Highway to relative success, a dedicated fanbase has been eager to see what Gearhead is up to nowadays, and we finally have our answer: a retro-style arcade game that acts as an endless runner of sorts.

In Scrap Divers, you’ll take on the role of a contestant in an underground sport in a dystopian robot society. This sport sees you fall down a seemingly endless tunnel, dodging traps, flames, spikes, and everything in between as you collect coins to up your score and, if you’re lucky, find the true end to this tunnel where a case full of gold scrap and your own freedom lay.

Gameplay-wise, this is certainly within the endless runner genre. However, where Temple Run or Subway Surfers sees you on a horizontal plane running forward, Scrap Divers sends you hurtling in a third-person view behind your character as they fall down this tunnel and avoid all of the various traps that pop out as you descend. 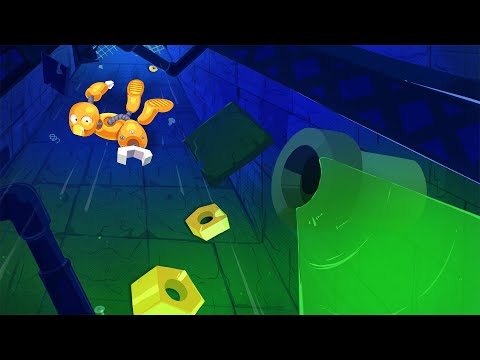 The retro style comes in with the visuals and the audio as well. Sporting a 3D pixel aesthetic with rough edges and smooth textures, it calls back to old SNES-era gaming. The soundtrack does as well, featuring chiptune tracks that bop in the background, keeping you immersed in the intense gameplay.

Scrap Divers also sports a roster of over 15 different robots, each with unique abilities and their own respective challenges as well. Combine that with the 8 unique environments you’ll fall through and there’s a fair bit of variety on display here.

Scrap Divers will launch later this year onto the Play Store and the App Store as well. Currently, there’s no pre-registration available, but you can stay tuned to the Gearhead Games Twitter account for more updates as we ease closer to launch!

Looking to run until your legs give out? Check out our Top 25 best endless runner games for Android!

Next Up :
Razer's Kishi V2 controller is now available for iOS following its Android release earlier this year