Move on my command

Salvaged is meant to be played on a portable gaming device and a PC simultaneously. It's described, in fact, as a dual-screen game.

It's a tactical real-time shooter in which you control a squad of four RISC operatives. Your goal is to move into wrecked starships to retrieve "black-box flight data".

Anything else you loot is just a bonus that will probably come in handy later. As you'd expect, mind, there will be large angry aliens to shoot along the way.

So, about that dual-screen play...

On the touchscreen you have to hand, you get a top-down view of your squad and the environment. You select specific members and the path you want them to take via taps. 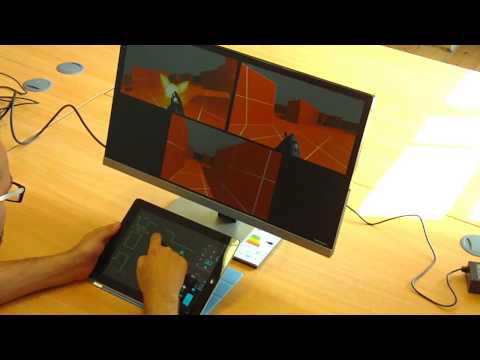 The PC monitor displays the first-person views of each squad member. You have to glance back and forth between the screens to acquire information and then co-ordinate tactics around it.

At the moment, the squad members are autonomous, meaning that they'll shoot at enemies and perform other event-based actions automatically.

Later, though, you'll have more control over their actions than the simple movement showcased in the prototype.

Salvaged is at an early stage of development, but its multi-platform play is something that we could get incredibly excited about.

You can find out more information about Salvaged on its website.

Kickstart this: Salvaged is a multi-screen fusion of FPS and RTS about communication

Salvaging the second screen: Why PC and console games can't ignore what's in a player's pocket